Oral Arguments in Wood v. Moss: The Complaint by the Anti-Bush Protestors

At the heart of this case is a very simple complaint: During a campaign stop by then-President Bush in Portland, Oregon, the Secret Service treated anti-Bush protestors differently from pro-Bush demonstrators, relocating the former while allowing the latter to remain.

But the complaint raises a host of legal issues that ricocheted through the oral arguments {transcript} in Wood v. Moss at the United States Supreme Court today. 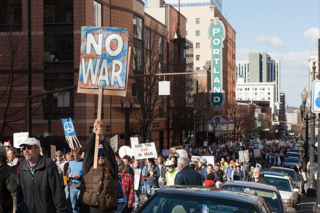 image from later protest in Portland via

The first issue is whether the complaint satisfied Ashcroft v. Iqbal, with Chief Justice Roberts specifically referring to the opinion during the oral argument of Steven Wilker, representing the Respondents, who were the protestors:

In Iqbal, and just quoting here from page 681, the Court goes on to consider the factual allegations in the complaint to determine if they plausibly suggest an entitlement, and they go on to say, but given more likely explanations, they do not plausibly establish this purpose.

Roberts returned to Iqbal, stating that the Government's alternative explanation in its motion to dismiss the complaint "doesn't have to be so compelling.":

It simply has to be more likely, is the quote from Iqbal on 681, and it has to be an obvious alternative explanation. And that's enough, no matter what you've alleged.

There was certainly some concern expressed that without Iqbal, the district judge might have fewer "weapons" available to curb discovery, but there was also not uniform preoccupation with Iqbal, with Justice Breyer posing a hypothetical about discovery and saying "Forget Iqbal for the moment."

Yet another procedural barrier discussed by the Court is the doctrine of qualified immunity, requiring that the constitutional infringement be "clearly established" at the time it occurs in order to hold government agents accountable. The Government's best case in this regard is Reichle v. Howards, which counsel mentioned repeatedly, decided in 2012, which held that Secret Service agents had qualified immunity and rejected the claim of retaliatory arrest for a man at a Dick Cheney shopping mall appearance.

But there seemed to be an "aha" moment for Justice Scalia - - - who had previously accused the attorney for the government, Ian Gershengorn, Deputy Solicitor General, for not sufficiently raising such arguments - - - during Wilker's argument.  Scalia asked " how can it be  clearly established if we have never held that there is a Bivens cause of action for a First Amendment violation? We've never held that, have we? How can you possibly say that the violation here is clearly established."

MR. WILKER: Well, I think it's different to say whether or not there is a remedy for the violation as to whether the violation was clearly established.

MR. WILKER: The violation was clearly established. Whether or not there is a remedy for that violation under Bivens - - -

Yet Scalia might not be convinced that there would actually be a First Amendment violation, given his repeated references to the Fourth Amendment in which motivation should not be considered.

At several points, the oral argument did focus on the question of viewpoint discrimination under the First Amendment, such as in the Deputy Solicitor's exchange with the Justice Ginsburg:

JUSTICE GINSBURG: Mr. Gershengorn, suppose it's originally set up by the police, the motorcade is coming down, each side has equal access. Then the Secret Service comes along and said: Clear the anti­Bush demonstrators. Suppose that, that ­­ those were the facts. Would there be a valid Bivens claim?

MR. GERSHENGORN: Your Honor, the question would depend on whether there was a valid security rationale. I think in the context of a motorcade ­­

On the one hand, there is a concern for ability of the Secret Service to make security decisions to protect the President without being subject to second-guessing by possible plaintiffs and the courts themselves.

On the other hand, there is the concern that there might develop a "Praetorian Guard" - - - as Justice Breyer stated - - - and that the trampling of First Amendment rights on the basis of viewpoint might be accepted.

As one of the cases on this Term's heavy First Amendment docket, its importance may be overshadowed, but it should not be underestimated.

Listed below are links to weblogs that reference Oral Arguments in Wood v. Moss: The Complaint by the Anti-Bush Protestors: