There have been a spate of federal judges declaring state constitutional or statutory provisions banning recognition of same-sex marriage unconstitutional under the Fourteenth Amendment:

Other than Lee v. Orr, in which the judge was only ruling on an earlier start date for same-sex marriage than the Illinois legislature had declared, the judges in each of these cases relied on Justice Scalia's dissenting opinions.

In "Justice Scalia’s Petard and Same-Sex Marriage," over at CUNY Law Review's "Footnote Forum," I take a closer look at these cases and their relationship to Shakespeare's famous phrase from Hamlet. 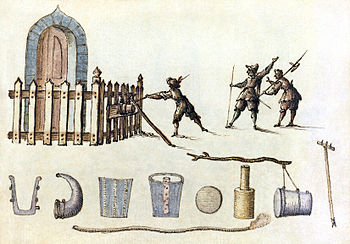 "A petard, from a seventeenth century manuscript of military designs" via

Listed below are links to weblogs that reference Justice Scalia's Dissents and the Post Windsor Same-Sex Marriage Cases: