In its relatively brief opinion in today in Bell v. City of Winter Park, a panel of the Eleventh Circuit found the portion of an ordinance allowing a 50 foot buffer zone around a private residence related to loitering violated the First Amendment.

A person regularly residing in a ‘dwelling unit’, as that term is defined in Section 62-79, may post a ‘no loitering’ sign on the property of such residence in which the person regularly resides, and an officer of the City may enforce this section against any person remaining in a public area, including a park, sidewalk, street, public right-of-way, after the sign is posted, who loiters, stands, sits, or lies before or about the dwelling unit on which property the ‘no loitering’ sign is posted, or remains on public property within a buffer area as defined in Section 62-79, of fifty (50) feet from the property line of such residence.

The opinion by Judge Gerald Tjoflat (who has been a circuit court judge since 1975) reasoned that while the provision may look content neutral, it allowed private persons to prohibit speech in public fora for content or viewpoint reasons. 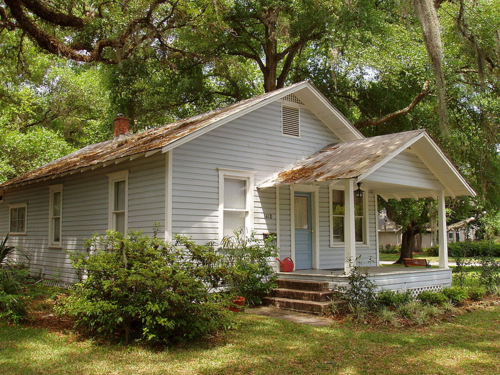 Jack Kerouac's House, near [in] Winter Park, Florida via

Further, there was "immense discretion."

The amount of discretion § 62-77 provides is alarming. Private citizens are permitted to have the City regulate speech on traditional public fora for any reason. Additionally, § 62-77 provides no standards for enforcement, leaving City officers free to enforce the prohibition on the basis of the content or viewpoint of an individual’s speech. We therefore hold that § 62-77 is unconstitutional.

While reversing the district judge on this issue, the court did affirm the judge and uphold the constitutionality of another subsection of the ordinance, prohibiting "any person or persons to picket, protest or conduct any picketing or protesting activity within a buffer area of 50 feet from the property line of any dwelling unit in the City of Winter Park."  As the Eleventh Circuit panel correctly noted, this provision of the ordinance was "nearly on all fours" with Frisby v. Schultz, (1988). The Court in Frisby valued the "well-being, tranquility, and privacy of the home” and construed the law as a valid time, place, and manner regulation.

The court's distinction between "loitering" and "picketing" is a careful and noteworthy one.

So, the photo of Jack Keroac's home is apropos of ...?

While the original wikimedia photo listed JK's once-home (now writers' retreat) in Winter Park, some further checking reveals it is actually in the College Park section of Orlando, about 10 miles west of Winter Park, Florida. Ten miles not very far for the characters of On The Road, but could be for JK in his days living with his mother in Florida, and certainly might as well be in Jupiter (another Florida city) for the purposes of the Winter Park ordinance's application. Still, maybe it's a representative house of the area - - - or at least as the area once was? And Winter Park does sometimes claim the nearby house in its tourist materials. I've updated the caption to say "near" rather than "in."