In an op-ed for The Guardian, Professor Lea Brilmayer contends that not only is the Crimean referendum regarding joining Russia problematic given the presence of Russian troops, but then

there's a bigger problem: the referendum seems inconsistent with the Ukrainian constitution, which says all Ukrainians would have to vote on Crimea’s secession – not just those living in Crimea.

Indeed, Title X of the Constitution of Ukraine governs "The Autonomous Republic of Crimea" and does not seem to provide for secession.  Yet questions of secession are vexing, even in the United States, as we've discussed. 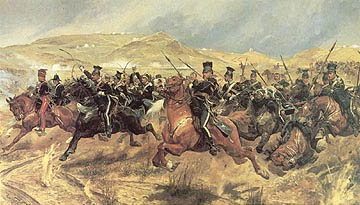 "Charge of the Light Brigade" via

Listed below are links to weblogs that reference Daily Read: Lea Brilmayer Argues the Crimean Referendum is Invalid - - - and Unconstitutional: