In her op-ed in the NYT, entitled "Renting Judges for Secret Rulings," ConLawProf Judith Resnik (pictured below) asks "Should wealthy litigants be able to rent state judges and courthouses to decide cases in private and keep the results secret?," and quickly adds that the answer should be an "easy no."

But she argues that the recent Delaware legislation - - - declared unconstitutional by a divided panel of the Third Circuit as we previously discussed  - - - threatens to subvert access to the courts should Delaware be successful in its petition for certiorari.

The Delaware legislation is a dramatic example of rich litigants using their resources to close court systems that taxpayers support and constitutions require. But the problem goes beyond Delaware. To honor constitutional commitments that “all courts shall be open,” the court should refuse the Delaware judges’ request, and Congress should restore rights to public courts for consumer and employment disputes. 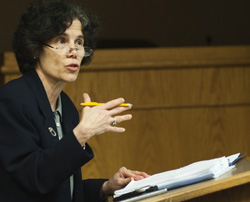 [image of Judith Rensik via]

Listed below are links to weblogs that reference Daily Read: Judith Resnik on a Different Type of Secret Court: