Writing for a unanimous Court in 1995, Justice Souter in Hurley v. Irish-American Gay, Lesbian, and Bisexual Group held that the First Amendment rights of the South Boston Allied War Veterans Council (and its individual member John "Wacko" Hurley) allowed the exclusion of the Irish-American Gay, Lesbian, and Bisexual Group (GLIB) from the St. Patrick's Day Parade, despite the Massachusetts' public accommodation law prohibiting discrimination on the basis of sexual orientation. 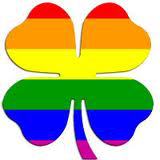 Justice Souter famously opined that although the parade might seem not to have a particularized message that would be inconsistent with GLIB, its message was as particularized as "the unquestionably shielded painting of Jackson Pollock, music of Arnold Schonberg, or Jabberwocky verse of Lewis Carroll."

Some St. Patrick's Day parades continue to exclude identified sexual minority groups, including the Boston one - - - in which Boston's mayor will reportedly not participate this year, and the New York City one - - - in which NYC's mayor will likewise reportedly not participate this year.  Other St. Patrick's Day parades do not ban LGBT groups.

As the blog post infers, the answer to Mr. Bortman's question is the First Amendment would trump the local ordinance as it trumped, rightly I rather regret to say, the state law.