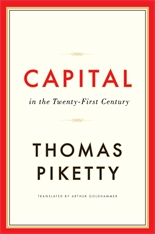 In a review in this week's New Yorker, John Cassidy makes the case that the new book by Thomas Piketty, Capital in the Twenty-First Century, is one that "nobody interested in a defining issue of our era can afford to ignore."

This defining issue is economic inequality.  Piketty's book, translated from the French and published by Harvard University Press, is an examination of the phenomenon as well as a proposal for remediation.

The proposal is a "wealth tax."  Perhaps that's a "political nonstarter" as Cassidy suggests and as Piketty seemingly acknowledges.  But perhaps it's not.

Listed below are links to weblogs that reference Daily Read: Capital in the 21st Century:

It's a political non-starter. Arguably, a progressive tax system is a "wealth tax."

I believe Piketty is speaking of taxes on accumulated wealth and not merely income.