Canada Supreme Court: No to Nadon

In its opinion today in Reference re Supreme Court Act, ss. 5 and 6, the Supreme Court of Canada, with only one Justice dissenting, concluded that Marc Nadon would not be joining them on the nation's highest bench.

As we previously discussed, the nomination of Marc Nadon (objected to by some for its failure to advance gender parity), posed a constitutional question regarding whether a judge on the Federal Court of Appeal was eligible for the Supreme Court.   Cribbing from another of our discussions that quoted Canadian scholars Michael Plaxton and Carissima Mathen, here's the problem in a nutshell:

Section 5 of the Supreme Court Act states: “Any person may be appointed a judge who is or has been a judge of a superior court of a province or a barrister or advocate of at least ten years standing at the bar of a province.” Section 6 provides: “At least three of the judges shall be appointed from among the judges of the Court of Appeal or of the Superior Court of the Province of Quebec or from among the advocates of that province.” Mr Justice Nadon was, at the time of his nomination, neither a judge of a Quebec superior court nor a current member of the practicing bar. It is therefore not clear that he is “among the advocates” of Quebec within the meaning of section 6. 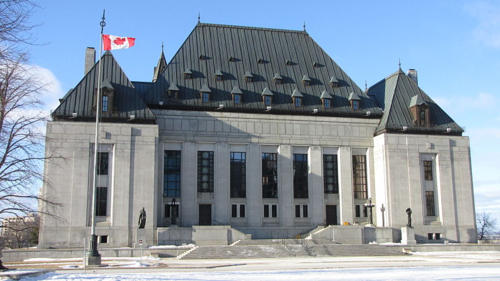 Today the Court decided that

A judge of the Federal Court or Federal Court of Appeal is ineligible for appointment to the Supreme Court of Canada under s. 6 of the Act.  Section 5 of the Act sets out the general eligibility requirements for appointment to the Supreme Court by creating four groups of people who are eligible for appointment:  (1) current judges of a superior court of a province, including courts of appeal; (2) former judges of such a court; (3) current barristers or advocates of at least 10 years standing at the bar of a province; and (4) former barristers or advocates of at least 10 years standing.  However, s. 6 narrows the pool of eligible candidates from the four groups of people who are eligible under s. 5 to two groups who are eligible under s. 6.  In addition to meeting the general requirements of s. 5, persons appointed to the three Quebec seats under s. 6 must be current members of the Barreau du Québec, the Quebec Court of Appeal or the Superior Court of Quebec.
The plain meaning of s. 6 has remained consistent since the original version of that provision was enacted in 1875, and it has always excluded former advocates.  By specifying that three judges shall be appointed “from among” the judges and advocates (i.e. members) of the identified institutions, s. 6 impliedly excludes former members of those institutions and imposes a requirement of current membership.  Reading ss. 5 and 6 together, the requirement of at least 10 years standing at the bar applies to appointments from Quebec.
This textual analysis is consistent with the underlying purpose of s. 6 and reflects the historical compromise that led to the creation of the Supreme Court as a general court of appeal for Canada and as a federal and bijural institution.  Section 6 seeks (i) to ensure civil law expertise and the representation of Quebec’s legal traditions and social values on the Court, and (ii) to enhance the confidence of Quebec in the Court.  This interpretation is also consistent with the broader scheme of the Act for the appointment of ad hoc judges, which excludes judges of the federal courts as ad hoc judges for Quebec cases.

The Court's opinion seems well-reasoned, careful, and right.  And while its effect is certainly cataclysmic to Nadon (and perhaps to his conservative supporters), it may be less so for Canadian politics ultimately, and even less so for Canadian constitutional law doctrinally.  Nevertheless,  Nadon's appointment to the Supreme Court would have changed Canadian Constitutional law.  And certainly, the nomination of a Justice to the nation's highest court being deemed ineligible to serve on that Court by the Justices of the Court themselves is certainly dramatic.

Listed below are links to weblogs that reference Canada Supreme Court: No to Nadon: