Largely reversing a district judge's opinion that had found various provisions of Pennyslvania's Funeral Director Law unconstitutional on various grounds, the Third Circuit opinion in Heffner v. Murphy upholds the law except for its restriction on the use of trade names as violative of the First Amendment.

One key to the panel's decision is that it surmised that the district judge's conclusions regarding the constitutionality of Pennsylvania's Funeral Director Law (FDL), enacted in 1952, "stem from a view that certain provisions of the FDL are antiquated in light of how funeral homes now operate."  But, the Third Circuit stated, that is not a "constitutional flaw." 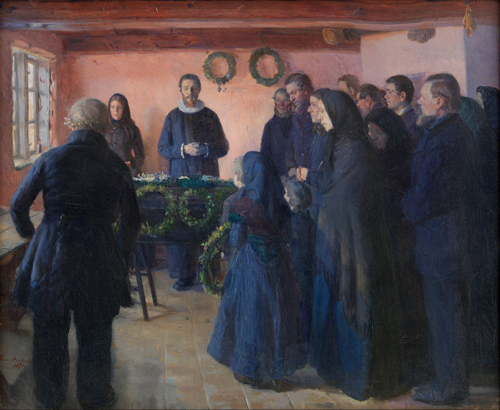 "A Funeral" by Anna Archer via

The challenged statutory provisions included ones that:

The constitutional provisions invoked - - - and found valid by the district judge - - - included the Fourth Amendment, the "dormant" commerce clause, substantive due process, the contract clause, and the First Amendment, with some provisions argued as violating more than one constitutional requirement.

The restrictions on commercial speech here are so flawed that they cannot withstand First Amendment scrutiny. Indeed, the District Court correctly identified the pivotal problem concerning the FDL’s proscription at Central Hudson’s third step: by allowing funeral homes to operate under predecessors’ names, the State remains exposed to many of the same threats that it purports to remedy through its ban on the use of trade names.  A funeral director operating a home that has been established in the community, and known under his or her predecessor’s name, does not rely on his or her own personal reputation to attract business; rather, the predecessor’s name and reputation is determinative. Nor does a funeral home operating under a former owner’s name provide transparency or insight into changes in staffing that the Board insists is the legitimate interest that the State’s regulation seeks to further.