It's being called the "no blankets for the homeless" ordinance and there's a petition directed to the Mayor of Pensacola, Florida to "stop" the ordinance as freezing temperatures come to the usually subtropical clime.

Passed in May 2013, the ordinance at issue is directed at prohibiting camping.  Section 8-1-22 of the Code of the City of Pensacola, Florida, provides:
(1) For purposes of this section, "camping" is defined as:
(a) Cooking over an open flame or fire out-of-doors; or
(b) Bathing in public for purposes of personal hygiene; or
(c) Sleeping out-of-doors under one of the following circumstances:
(i) adjacent to or inside a tent or sleeping bag, or
(ii) atop and/or covered by materials such as a bedroll, cardboard, newspapers, or
(iii) inside some form of temporary shelter.
(2) Camping is prohibited on all public property, except as may be specifically authorized by the appropriate governmental authority.
(3) Camping is prohibited on all property in the City used for residential purposes; provided, however, that camping is permitted on such property with the permission and consent of the property owner.
(4) An individual in violation of this ordinance who has no private shelter, shall be advised of available shelter in the City of Pensacola or Escambia County, in addition to any penalties of law.

Like many ordinances directed at the homeless, the constitutional inquiries begin with Clark v. Community for Creative Nonviolence, decided by the Court in 1984, and upholding a federal Park Service regulation against sleeping or camping in non-designated areas, including the National Mall. 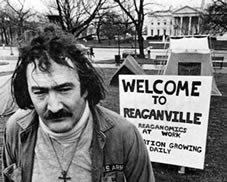 Mitch Snyder at the DC Community for Creative Nonviolence Demonstration

In Clark, the First Amendment was clearly applicable because the regulation was being applied to a demonstration, including tent cities, directed at the plight of the homeless. Nevertheless, even under a First Amendment analysis, the Court upheld the regulation.  Clark was likewise invoked regarding the Occupy protests, applicable to those that were on public land.

But whether the First Amendment applies at all will depend upon whether courts would construe covering one's self with a blanket - - - or otherwise - - - is expression.   Recall that the Sixth Circuit recently held "begging" to be protected speech under the First Amendment.  But "wearing" a blanket may have a higher hurdle to overcome, an issue that permeates the clothing as expression cases.

But whether or not the anti-blanket ordinance might survive a First Amendment challenge is not necessarily the point of the petition calling for the ordinance's end.  The petition is less about expression than about "humanity."

Listed below are links to weblogs that reference Pensacola, Florida Anti-Blanket Ordinance: