The intersection of First Amendment and copyright is not always well-marked and it is certainly murky in the Ninth Circuit's divided opinion in Garcia v. Google, involving the controversial "Innocence of Muslims" video posted on YouTube (owned by Google, Inc.).

While answering a casting call for a low-budget amateur film doesn’t often lead to stardom, it also rarely turns an aspiring actress into the subject of a fatwa. But that’s exactly what happened to Cindy Lee Garcia when she agreed to act in a film with the working title “Desert Warrior.”

The film’s writer and producer, Mark Basseley Youssef—who also goes by the names Nakoula Basseley Nakoula and Sam Bacile—cast Garcia in a minor role. Garcia was given the four pages of the script in which her character appeared and paid approximately $500 for three and a half days of filming. “Desert Warrior” never materialized. Instead, Garcia’s scene was used in an anti-Islamic film titled “Innocence of Muslims.” Garcia first saw “Innocence of Muslims” after it was uploaded to YouTube.com and she discovered that her brief performance had been partially dubbed over so that she appeared to be asking, “Is your Mohammed a child molester?”

These, of course, are fighting words to many faithful Muslims and, after the film aired on Egyptian television, there were protests that generated worldwide news coverage. An Egyptian cleric issued a fatwa, calling for the killing of everyone involved with the film, and Garcia soon began receiving death threats. She responded by taking a number of security precautions and asking that Google remove the video from YouTube.

The copyright issue seems to be whether an actor can copyright her performance and how issues such as fraud and work-for-hire fit into such an analysis.  Yet even if Garcia prevails in her copyright claim, a First Amendment issue arises with the relief - - - a preliminary injunction.  The majority gives short shrift to Google's First Amendment argument raising such an argument:

The problem with Google’s position is that it rests entirely on the assertion that Garcia’s proposed injunction is an unconstitutional prior restraint of speech. But the First Amendment doesn’t protect copyright infringement. Cf. Eldred v. Ashcroft, 537 U.S. 186, 219–220 (2003). Because Garcia has demonstrated a likelihood of success on her claim that “Innocence of Muslims” infringes her copyright, Google’s argument fails. The balance of equities therefore clearly favors Garcia and, to the extent the public interest is implicated at all, it, too, tips in Garcia’s direction.

(Recall that the Court in Eldred upheld the Sonny Bono Copyright Term Extension Act and found copyright generally consistent with the First Amendment).

Dissenting, Judge N.R. Smith argued that the First Amendment should be weighed heavily as the public interest militating against a preliminary injunction - - - but only because he believes there is no statutory claim for copyright infringement:

But the case at bar does not present copyright infringement per se. Instead (in an unprecedented opinion), the majority concludes that Garcia may have a copyright interest in her acting performance. Maj. op. at 10. As a result, Google’s contention, that issuing a preliminary injunction on these facts may constitute a prior restraint of speech under the First Amendment, identifies an important public interest.

As Judge Kozinski's majority opinion notes, this is "a troubling case."  But while the majority is troubled by the deception of and possible harm to Garcia, others are more troubled by the First Amendment implications of ordering any material removed from YouTube.  YouTube has complied, but has availed itself of the oft-suggested remedy of "more speech" as in the image below: 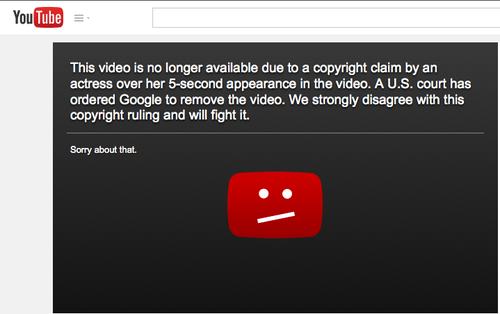 Listed below are links to weblogs that reference Ninth Circuit Orders "Innocence of Muslims" Video Taken Down :