While primarily known as a criminal law scholar, Professor Andrew Taslitz's work was integral to constitutional law, regularly focused not only on issues of constitutional criminal procedure, the death penalty, and national security, but also on equality of race, class, and gender.

He is editor of a forthcoming volume to be published by the ABA entitled "Media Coverage in Criminal Justice Cases: What Prosecutors and Defenders Should and Should Not Say" that exemplifies his contributions to both the scholarly and practicing communities.

He is also one of the 26 law professors featured in What the Best Law Teachers Do (Harvard University Press, 2013). 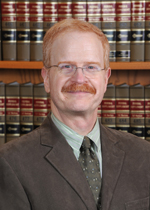 There is an announcement and memorial page (including ways to contribute) from American University Washington College of Law, where he began teaching in 2012, after having been at Howard Law School for almost two decades.

Affectionately known far and wide as "Taz," he will be missed.

Listed below are links to weblogs that reference In Memoriam: Andrew Taslitz: