In its unanimous  opinion today in ACLU of North Carolina v. Tata a panel of the Fourth Circuit has concluded that North Carolina's specialty license plate "Choose Life" is unconstitutional under the First Amendment.

Recall that in December 2012,  Senior United States District Judge James Fox found that while the the "choose life" specialty license plate was offered by the government, it was not the type of "government speech" to which the First Amendment would not apply.

As the Fourth Circuit explained:

The Supreme Court and this Court have recognized individual speech interests in license plate messages. And in this case, too, the specialty plate speech at issue implicates private speech rights, and thus First Amendment protections apply.

But this did not mean the state had no responsibility.  Indeed, the court concluded:

North Carolina invites its vehicle owners to “[m]ake a statement” and “promote themselves”—but only if they are on the government’s side of a highly divisive political issue. This, North Carolina may not do. Because the specialty plate speech at issue implicates private speech rights and is not pure government speech, North Carolina’s authorizing a “Choose Life” plate while refusing to authorize a pro-choice plate constitutes viewpoint discrimination in violation of the First Amendment. 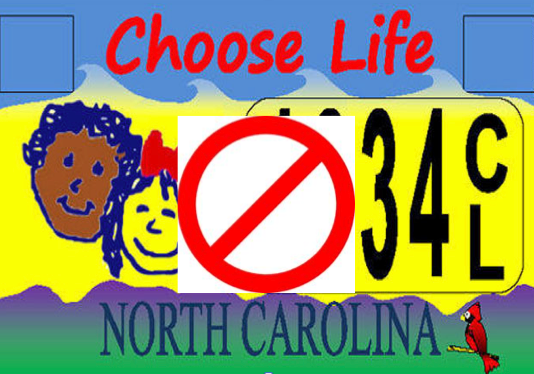 The court's opinion is an excellent rehearsal, in less than 30 pages, of what might be called the First Amendment doctrine of license plates, following from the classic First Amendment case of Wooley v. Maynard.  We recently discussed the Native American image on the Oklahoma license plate and Michigan's refusal of specific letters on a vanity license plate.