Aftermath of Windsor in the Federal Government: AG Holder's Memo

Citing United States v. Windsor, declaring DOMA's section 3 unconstitutional, in a Memorandum issued on Monday February 10, Attorney General Eric Holder has announced that it is the policy of the federal government to "recognize same-sex marriages as broadly as possible."  Holder discussed the forthcoming memo in a speech delivered the previous weekend. 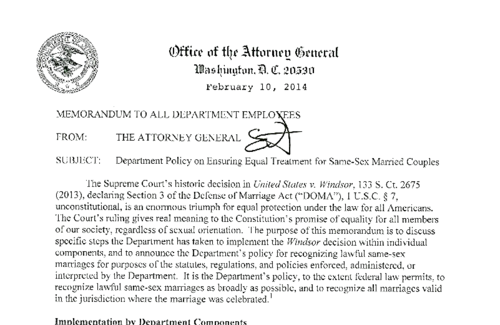 In the memo, Holder specifies that marriage recognition will extend to "same-sex marriages, valid in the jurisdiction where the marriage was celebrated to the extent consistent with the law."  This shifts the marriage validity question away from domicile or residence.

Importantly, in footnote 1 of the Memo, Holder notes that the policy is limited to marriage and "does not apply to individuals who have entered into another similar relationship such as a domestic partnership or civil union, recognized under state law that is not denominated as a marriage under the laws of that state."

Holder also expresses pride in the DOJ's role in the litigation challenging DOMA, citing his 2011 letter concluding that sexual orientation classifications should be subject to strict scrutiny and that DOMA failed this constitutional test.

One of the more interesting aspects of Holder's Memo is the discussion of marital testimonial privileges.  Holder directs prosecutors to apply the memo "prospectively" - - - to conduct that occurred on or after the date of the Windsor decision (and not the date of the 2011 Holder memo or the present memo).

Listed below are links to weblogs that reference Aftermath of Windsor in the Federal Government: AG Holder's Memo: