In its opinion this week in Riddle v. Hickenlooper, a panel of the Tenth Circuit unanimously held unconstitutional a differential contribution limit in the Colorado campaign finance scheme as violating the Equal Protection Clause. 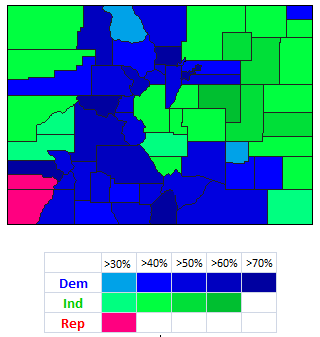 Image of Results From Colorado's 3-way Gubernatorial Election in 2010; Riddle involves a Congressional election also in 2010

The panel held that because  "the statutory classification affects a fundamental right, the right to political expression"  the correct equal protection standard should be a "standard that is at least as rigorous as the standard applied under the First Amendment," and that under standard the classification fails.   The panel found that the anti-corruption (or appearance of corruption) governmental interest was "sufficiently important," but the means chosen "are ill-conceived to advance these interests."

The statutory classification might advance the State’s asserted interest if write-ins, unaffiliated candidates, or minor-party nominees were more corruptible (or appeared more corruptible) than their Republican or Democratic opponents. But the Defendants have never made such a suggestion. In the absence of a link between the differing contribution limits and the battle against corruption, the means chosen are not closely drawn to the State’s asserted interest.

I confess some uncertainty about the level of scrutiny the Supreme Court wishes us to apply to this contribution limit challenge, but I harbor no question about the outcome we must reach. My colleagues are surely right that, as applied, Colorado’s statutory scheme offends the Constitution’s equal protection guarantee, whatever plausible level of scrutiny we might deploy.

Interestingly, both the concurring opinion and the panel majority opinion, authored by Judge Bacharach, clearly rest their analysis on the Equal Protection Clause, and thus do not reach the First Amendment challenge.  Nevertheless, First Amendment doctrine and precedent permeate the reasoning.  Yet given that the Colorado campaign finance scheme results in such an untenable classification, the conclusion of an equal protection classification seems the right one.

Listed below are links to weblogs that reference Tenth Circuit Holds Colorado's Campaign Finance Scheme Unconstitutional as a Violation of Equal Protection: