NYC's practice of stop and frisk has been controversial in the streets and in the courts.  Recall

But before the Second Circuit could issue an opinion on the merits, NYC elected a new mayor, who today announced an agreement in Floyd v. City of New York.  Mayor Bill deBlasio (pictured below) announced that NYC has asked for a remand of the appeal to the district court, and has agreed to a court-appointed monitor who will serve for three years, overseeing the NYPD’s reform of its stop-and-frisk policy and reporting to the court. 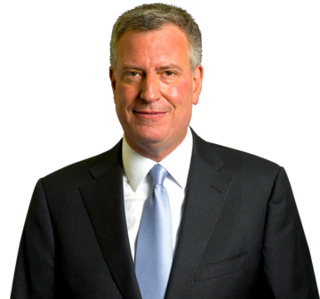 Listed below are links to weblogs that reference Stop and Frisk: NYC Mayor Abandons Appeal in Floyd v City of NY:

Thank you for your continued coverage of this case.

It's worth mentioning that the Second Circuit immediately ordered the police unions, who are seeking to intervene in the appeal, to respond to the City's motion seeking remand. This may have an impact on the parties' ability to settle, at least with respect to the scope of any remedies imposed.

Also, settling Ligon and Floyd is a significantly different move than withdrawing the cases' appeals. The remedies the parties are considering appear to be significantly narrower than those ordered by Judge Scheindlin. Additionally, the City may structure the settlements in such a way that will prevent plaintiffs from claiming "prevailing party" status. Only equitable claims remain in Floyd, so even if an agreement has the effect of enforcing the injuctive relief ordered by Judge Scheindlin, the plaintiffs' attorneys' ability to recover fees is not as certain as it would have been had the appeals been withdrawn.