In its overdue opinion in The Evergreen Association, Inc. d/b/a Expectant Mother Care Pregnancy Centers v. City of New York, a divided panel of the Second Circuit ruled that only one of the three major provisions of NYC's Local Law 17 seeking to mandate disclosures by pregnancy crisis centers was constitutional.

Recall that in July 2011, a federal district judge enjoined all of Local Law 17 finding that the disclosure provisions did not survive strict scrutiny under the First Amendment, and the Second Circuit heard oral arguments in the appeal 16 months ago.  Meanwhile, the Fourth Circuit considered two similar laws seeking to compel disclosures by pregnancy crisis centers, issuing two en banc opinions in 2013.  The en banc Fourth Circuit in Greater Baltimore Center for Pregnancy Concerns, Incorporated v. Mayor and City Council of Baltimore reversed the granting of a preliminary injunction finding fault with the application of the summary judgment standard by the district judge.   The en banc Fourth Circuit in Centro Tepeyac v. Montgomery County, 722 F.3d 184 (4th Cir. en banc), affirmed a finding that one of the mandated disclosures was constitutional and the other was not. 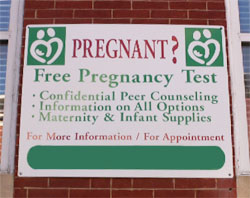 The underlying problem that the local laws intended to address is the existence of "crisis pregnancy centers" that arguably appear to be medical offices but are anti-abortion counseling centers.  The solutions that the local laws proposed were various "disclosures" by the centers.  In the case of Local Law 17, the disclosures were three:

The Second Circuit upheld only the first, the "Status Disclosure."

The Second Circuit's opinion declined to decide whether the disclosures merited strict scrutiny or the lesser standard of intermediate scrutiny, stating - - - not altogether convincingly - - - that its conclusions were the same under both standards.

The panel opinion did find that the government had a compelling interest for Local Law 17 and thus for all three disclosure provisions: protecting public health and protecting a woman's access to reproductive health care.  But the panel found that only the status disclosure was "sufficiently tailored" to these interests.  In finding that the status disclosure was narrowly tailored, this certainly met both strict and intermediate scrutiny standards.

As to the services disclosure, the panel considered the "context" of the mandated disclosure regarding whether the facility provides or provides referrals for abortion, emergency contraception, or prenatal care to be the "public debate over the morality and efficacy of contraception and abortion."  Given this context of "public issues," the burden to justify the compelled speech is high.  Not surprisingly, the panel found that the mandated services disclosure did not survive.  However, the intermediate scrutiny analysis is less satisfying.  Here's the entirety of the analysis:

Finally, we consider whether a different answer would obtain under intermediate scrutiny, which looks to whether the regulation at issue is not more extensive than necessary to serve a substantial governmental interest. While it is a closer question, we conclude that it would not, considering both the political nature of the speech and the fact that the Status Disclosure provides a more limited alternative regulation.

The panel's analysis on the government speech analysis is less explicit regarding the standard of review, emphasizing that the government message could be conveyed in many different ways.

In addition to the specific disclosures, the district judge had found that Local Law 17's definition of "pregnancy services centers" was unconstitutionally vague; a conclusion with which the Second Circuit panel majority disagreed.  However, dissenting in part, one judge would have found all three provisions unconstitutional, arguing that the law is a "bureaucrat’s dream" containing  "deliberately ambiguous set of standards guiding its application, thereby providing a blank check to New York City officials to harass or threaten legitimate activity."

The Second Circuit opinion largely agrees with the 2013 en banc Fourth Circuit's Centro Tepeyac v. Montgomery County, but the constitutional doctrine remains unclear.  Given the complexities, and judicial decisions upholding other mandated disclosures in the reproductive rights realm, this remains a great subject for some scholarly intervention.

Listed below are links to weblogs that reference Second Circuit on Mandatory Disclosures for "Pregnancy Crisis Centers":