After the President's State of the Union Address last evening, a NY1 reporter sought comments from United States Representative Michael Grimm  (pictured), but when the reporter attempted to go "off-topic," the Congressperson abruptly ended the interview.  Nothing unusual about that, but then Representative Grimm came back to confront the reporter and the following was caught on camera: 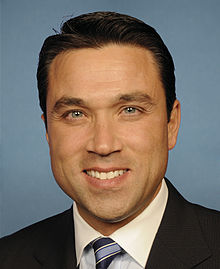 The video can be viewed on the NY1 site here, with additional reporting including Representative Grimm's subsequent statement.

Threats - - - or "true threats" - - - as a categorical exemption to protected speech is muddled, but most analysis does consider "imminence" as necessary, as in Hess v. Indiana (1973) where the Court found that the statements during a protest about 'taking the street' was directed at some indefinite future time.  Similarly in Virginia v. Black (2003), the Court found that cross-burning was not a sufficient threat, over an eloquent dissent by Justice Thomas.   The classic case of Brandenburg v. Ohio (1969) might also be invoked, although there should be little question that Grimm was engaging in advocacy.

Similarly, Representative Grimm could argue he should be protected by the Speech and Debate Clause, Article I §6 cl. 1, providing that members of Congress shall be privileged from arrest "for any Speech or Debate in either House."  The Court in Gravel v. United States (1972) held that this applied to protect legislators when they were engaged in  integral part of the deliberative and communicative process of legislation - - - which would presumably not include an interview with a reporter.

Listed below are links to weblogs that reference Protected Speech (& Debate) or Threat?:

I don't understand your reference to Virginia v. Black. In that case, the Supreme Court upheld a statute making it a crime to burn a cross "done with the intent to intimidate." The only provision of the statute struck down, as to which Thomas dissented, was the part that declared cross burning to be prima facie evidence of the requisite intent. Thus, if Rep. Grimm had an intent to communicate a serious intent to commit an act of unlawful violence against the reporter, Grimm engaged in a "true threat."

You are correct (as usual!) Professor Purvis, providing a more precise description of the holding in Virginia v. Black. But I do think that the Court held that burning a cross "in and of itself" was not a threat - - - do you think that is a fair reading?

I don't think that Virginia v. Black was a speech-protective decision. The decision held that " "True threats" encompass those statements where the speaker means to communicate a serious expression of an intent to commit an act of unlawful violence to a particular individual or group of individuals." You are correct that simply burning a cross would not be unlawful under this analysis ("Virginia's statute does not run afoul of the First Amendment insofar as it bans cross burning with intent to intimidate.") But, pointing a gun at someone is not an assault unless it is done with the requisite intent--to cause apprehension of a wrongful contact. So burning a cross is protected speech to the same extent that pointing a gun is a protected act--if a jury concludes the speaker (cross burner) had "intent to intimidate," the speaker goes to jail. The jury cannot presume intent from the mere act of burning, but can infer it from the circumstances. The two defendants whose proceedings were remanded burned a cross that the victim noticed the next morning, 20 feet from his house. Thus, the court apparently believes that such circumstances support a finding of intent to intimidate. I do not ignore the fact that cross-burning is one of the most hateful forms of speech; I think it is extremely dangerous for our constitutional rights to give the government power to make it a crime by pretending that "intent to intimidate" will somehow limit the potential number of convictions. As the majority noted, "The act of burning a cross may mean that a person is engaging in constitutionally proscribable intimidation. But that same act may mean only that the person is engaged in core political speech." Even though the USSC struck down the "prima facie evidence" provision, how will juries distinguish between these two acts? The court quoted Gerald Gunther: "The lesson I have drawn from my childhood in Nazi Germany and my happier adult life in this country is the need to walk the sometimes difficult path of denouncing the bigot's hateful ideas with all my power, yet at the same time challenging any community's attempt to suppress hateful ideas by force of law."" The rule of Virginia v. Black does not walk this difficult path safely for freedom of speech.