Oklahoma District Judge Joe Heaton declined to find that the Oklahoma license plate violated the First Amendment or other constitutional rights of Keith Cressman in his  opinion in Cressman v. Thompson.

Recall that the Tenth Circuit, in a divided opinion in June 2013, held that Cressman had made plausible allegations that the symbol on the Oklahoma license plate - - - arguably the “Sacred Rain Arrow”  - - - could be the basis of a compelled speech claim, similar to the classic First Amendment case of Wooley v. Maynard.

But on remand, Judge Heaton found that the plate's image (pictured below and included as the final page on Judge Heaton's opinion) did not rise to the level of symbolic speech with a particularized message.  Although stating that there should be a broad interpretation, Judge Heaton nevertheless held: 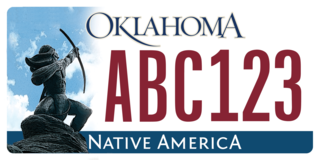 Judge Heaton rejected the constitutional significance of the "other things" Cressman learned about the image through "research."  He opined that the "fact that additional research is necessary to know or identify the message of which plaintiff complains is itself “strong evidence” that the image, as such, is not subject to constitutional protection."  Further, the image on the license plate is "not an exact replica" of the "Sacred Rain Arrow” sculpture; the plate image has the arrow pointing at a 60 degree angle "a pose consistent with a variety of scenarios in which a bow and arrow might be used," while the sculpture "involves a Native American shooting his arrow almost vertically into the air, a pose which arguably is more suggestive of a spiritual motive or connection."

Additionally, Cressman did not object to the words "Native America" on the license plate, another distinction from Wooley v. Maynard's "Live Free or Die" New Hampshire license plate.

Judge Heaton's final paragraph expressed a lack of sympathy for Cressman along with a suggestion:

The absence of a constitutional violation does not, of course, mean that plaintiff lacks a practical solution to the problem as he sees it. Oklahoma provides a simple, inexpensive, and readily available alternative, in the form of a specialty plate, for those who object to any aspect of a standard plate, an option which plaintiff has exercised both before and since his concerns with the current standard license plate arose.

Listed below are links to weblogs that reference Oklahoma's License Plate Survives Constitutional Challenge on Remand: