In a highly anticipated event today, President Obama delivered his remarks accompanied by a directive, Presidential Policy Directive/PPD-28, on "Signals Intelligence Activities,"  regarding NSA Surveillance.   Recall that late last year a presidential advisory committee issued a report with specific recommendations, that one program has been subject to differing judicial interepretations - - - in Klayman v. Obama, Judge Richard Leon granted a preliminary injunction against NSA surveillance of telephone metadata, while in American Civil Liberties Union v. Clapper,  Judge William J. Pauley granted a motion to dismiss in favor of the government, finding the same program constitutional - - - and that the national discussion on this issue is largely attributable to Edward Snowden.

While the judicial opinions did not specifically feature in Obama's remarks, Snowden did:

Given the fact of an open investigation, I’m not going to dwell on Mr. Snowden’s actions or motivations. I will say that our nation’s defense depends in part on the fidelity of those entrusted with our nation’s secrets. If any individual who objects to government policy can take it in their own hands to publicly disclose classified information, then we will never be able to keep our people safe, or conduct foreign policy. Moreover, the sensational way in which these disclosures have come out has often shed more heat than light, while revealing methods to our adversaries that could impact our operations in ways that we may not fully understand for years to come.

As for Obama's specific reforms, critics might also argue that they are more "heat than light."  Importantly, Obama did pay more attention to "foreign" persons.  He also broadly stated:

In no event may signals intelligence collected in bulk be used for the purpose of suppressing or burdening criticism or dissent; disadvantaging persons based on their ethnicity, race, gender, sexual orientation, or religion; affording a competitive advantage to U.S. companies and U.S. business sectors commercially; or achieving any purpose other than those identified in this section.

But the details, as usual, can be a bit more perplexing.  For example, consider this qualification to "competitive advantage" :

Certain economic purposes, such as identifying trade or sanctions violations or government influence or direction, shall not constitute competitive advantage.

The Electronic Frontier Foundation released a "scorecard" before Obama's remarks and directive.  Afterwards, it tweeted the results of its assessment of Obama's performance: 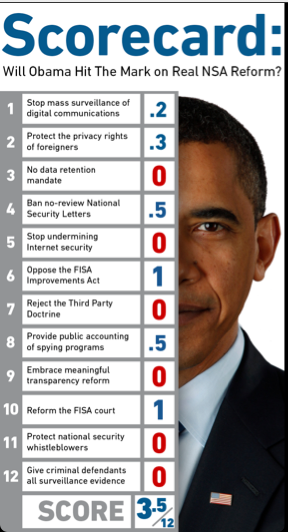 Listed below are links to weblogs that reference Obama's Speech and Directive on NSA Surveillance: