In the National Law Journal, former Iowa Supreme Court Justice Marsha Ternus has published an insightful commentary entitled Politics on the Bench — a Judge's View of Partisanship at Play.

Recall that Justice Ternus was one of the justices in the unanimous Iowa Supreme Court's 2009 decision in Varnum v. Brien holding that the same-sex marriage ban was unconstitutional under the state constitution's equality provision.  (The opinion remains one of the most closely reasoned and certainly well-structured of the numerous same-sex decisions).  She and two colleagues were then defeated in a 2010 merit retention election in which same-sex marriage was made a contentious issue.
In this commentary, Ternus argues that despite her experience in 2010, she continues "to believe that judicial merit selection systems like Iowa's, incorporating a nonpartisan screening commission and gubernatorial appointment, offer the best defense against politicized courts."  She contends that her experience was an "exception" rather than "the rule" and made her even more aware of "the reality faced every election year by prospective judges forced to campaign on partisan platforms, as they do in many other states." She argues that "courts composed of jurists elected on partisan platforms have an inherent polarization that can hardly be escaped."
Ternus' argument is gracious and sage.  But she does not address the lack of diversity, gender and otherwise, now present in the Supreme Court of Iowa. 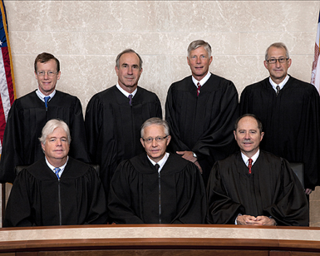 Current Justices of the Supreme Court of Iowa

Listed below are links to weblogs that reference Daily Read: Marsha Ternus on Being a (Former) Iowa Supreme Court Justice: