As we discussed yesterday, bipartisan legislation has been introduced in Congress that would amend the Voting Rights Act and recalibrate the coverage formula for preclearance, as a response the the Court's holding in Shelby v. Holder that section 4(b) of the VRA was unconstitutional.

Over at HuffPo today, LawProf Franita Tolson (pictured below) has a column entitled "The Importance of Tunnel Vision in Fixing the VRA's Coverage Formula." 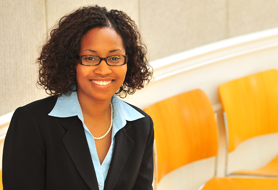 Tolson argues that while

there are some aspects of the legislation that may displease civil rights organizations, particularly the exemption of voter identification laws from coverage under the new formula, the proposal is a strong start to address the gaping hole in the preclearance regime created by the Court's decision in Shelby County.

But in some respects, she contends, the proposed legislation may go too far.

She concludes that the "legislative focus should be limited to replacing the coverage formula and leaving section 3(c) alone."

Worth a read for anyone considering the proposed amendments to the VRA and the legacy of Shelby v. Holder.

Listed below are links to weblogs that reference Daily Read: Franita Tolson on the Voting Rights Act Amendment Act of 2014: