Can the Virginia Attorney General (Not) Do That? Analysis of the Virginia AG's decision not to defend the state same-sex marriage ban

The Office of the Attorney General of Virginia, representing Janet M. Rainey, in her official capacity as State Registrar of Vital Records, has filed a Notice of Change of Position (and Memorandum in Support)  in Bostick v. Rainey, a case challenging the constitutionality of Virginia's same-sex marriage ban in federal district court. 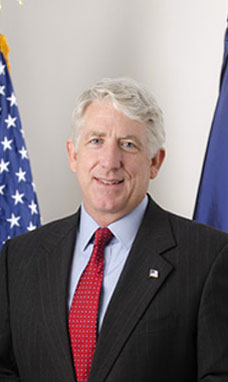 The Complaint in Bostick, filed in September 2013, challenges both the Virginia Statute § 20-45.2. prohibiting marriages between persons of the same-sex (adopted in 1975) and the constitutional amendment, Article I, §15A, prohibiting not only marriages but other forms of relationship recognition, passed by ballot initiative in 2006.

The change of the state's position by Mark Herring, the newly elected Attorney General (pictured right) may have been unexpected in some quarters, but it replicates the United States Attorney General's decision not to defend the constitutionality of the Defense of Marriage Act (DOMA) as well as California Attorney General Jerry Brown's decision not to defend the constitutionality of Proposition 8.   Recall that in the Proposition 8 trial, Perry v. Schwarzenneger, the constitutionality of Proposition 8 was defended by intervenors including protectmarriage.com, who the trial judge described as the “proponents” of Proposition 8.  When district judge Vaughn Walker ruled that Proposition 8 was unconstitutional, an appeal ensued, followed by questions about whether the "proponents" has standing to appeal.  Importantly, an attempt to obtain a writ of mandamus to mandate Governor Schwarzenegger appeal was unsuccessful.  And also importantly, the United States Supreme Court, in Hollingsworth v. Perry, decided that the "proponents" did not have standing to appeal, thus ultimately leaving the district judge's opinion valid.

The Proposition 8 litigation is thus an object lesson in the perils of the government not defending the constitutionality of the state laws at trial - - - it might insulate a district judge's finding of unconstitutionality from appeal.

On the other hand, the United States Supreme Court did find that there was standing to appeal in the Defense of Marriage case, United States v. Windsor, despite the fact that the United States was not actually defending the constitutionality of the DOMA statute.  The Court narrowly found that BLAG, the Bipartisan Legal Advisory Group of the House of Representatives who had taken up the defense of DOMA, at a substantial cost to taxpayers, had sufficient status to confer standing, or at least the case provided "sufficient adversarial presentation for the Court to decide to get to the merits."  (Recall that the Court appointed ConLawProf Vicki Jackson to brief and argue BLAG's standing).

Thus. should some parties in Virginia seek to defend the state statutory and constitutional scheme, they should seek to approximate BLAG rather than a more private proponent, even if one could find some proponent for the 1976 statute.

Listed below are links to weblogs that reference Can the Virginia Attorney General (Not) Do That? Analysis of the Virginia AG's decision not to defend the state same-sex marriage ban: