In case you never heard of Duck Dynasty, here's the Wikipedia scoop: 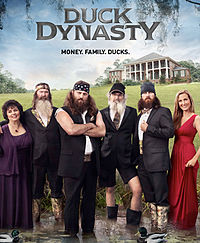 Duck Dynasty is an American reality television series on A&E. It shows the lives of the Robertson family, who became wealthy from their family-operated business, Duck Commander, operated in West Monroe, Louisiana, which makes products for duck hunters, primarily the duck call named Duck Commander. The Robertson men, brothers Phil, Si, and Phil's sons Jase, Willie, and Jep, are known for their long beards. The business began in a family shed, where Phil Robertson spent 25 years making duck calls from Louisiana cedar trees. His son Willie is now the CEO of the company. The family was previously featured on the series Benelli Presents Duck Commander and its spin-off Buck Commander, which still airs on the Outdoor Channel.
The show has broken several ratings records on both A&E and cable television as a whole; the fourth season premiere drew 11.8 million viewers, the most-watched nonfiction cable telecast in history.

But the show's popularity is in jeopardy, because the very popular patriarch of the show, Phil Robertson, gave a very unpopular interview with GQ and A&E has "suspended" him from the show.

The constitutional doctrine of "state action" comes into play because some - - - including Louisiana Governor Bobby Jindhal - - - are discussing the suspension as a First Amendment issue.  A&E, to again make use of Wikipedia, is a cable and satellite television station that is "a joint venture between the Hearst Corporation and Disney–ABC Television Group."

Of course, the text of the First Amendment begins "Congress shall make no law" and it is incorporated to the states through the due process clause of the Fourteenth Amendment, beiginning "No State Shall," thus textually expressing the doctrine of state action.  It is not that nongovernmental entities are never subject to the First Amendment as shown by the classic case of Marsh v. Alabama decided by the United States Supreme Court in 1946 and involving the "company town" of Chickasaw.  The Court there rejected the claim by Gulf Shipbuilding Corporation that it "owned" the town and could therefore prohibit the distribution of literature by Jehovah's Witnesses.  There are subsequent cases in which the Court has held that a quasi-private entity is subject to constitutional contraints based on a number of factors. (Law students needing a quick refresher might enjoy a CALI Lesson on state action.)

But in the case of A&E, there is little, if any, support for a finding that A&E could be fairly called a governmental actor and thus the First Amendment is simply inapplicable.

And the First Amendment will also have little, if anything, to do with A&E's decisions about the series entering its fifth season:

Listed below are links to weblogs that reference State Action in the News (Again) . . . Or "Duck Dynasty" :