Out of the Furnace? And Into the First Amendment 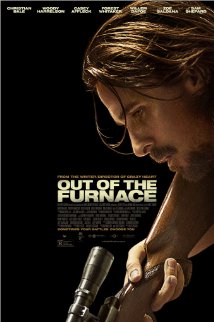 Can a movie be tortious consistent with the First Amendment?  That's the question raised by the  complaint in DeGroat v. Cooper filed this week in federal court concerning the movie "Out of the Furnace."

The fictional movie directed by Scott Cooper (a defendant in the lawsuit) stars actor Christian Bale (pictured right)  as Russell Blaze, who, when his younger brother "mysteriously disappears" and law enforcement seems inadequate and slow, takes the "law into his own hands" to find his missing brother.

The plot may seem prosaic, but importantly, the action is set in the Ramapo moutains of northern New Jersey amongst a particular group of people some of whom possess a particular surname that coincides with the plaintiffs.  As a paragraph from the complaint alleges:

[in the movie] the young man becomes involved in an underground bare-knuckle fight ring leading to his murder by a violent and evil character, Harlan De Groat, who is the chief of a gang of “inbreds” living in the Ramapo Mountains in New Jersey. Harlan DeGroat, portrayed by Woody Harrelson, is the head of a criminal gang that is identified as the Jackson Whites; which gang is described as a community of “inbreds” that inhabits the Ramapo Mountains in New Jersey. Another gang member is identified as Dwight Van Dunk. The community is depicted as lawless, drug- addicted, impoverished and violent; and the members appear to be of some sort of racially mixed heritage.

The claims for relief include defamation, false light, and negligent infliction of emotional distress.

The response by Cooper and "Relativity Media," will surely include a First Amendment defense.

Among the cases that will be important is Time, Inc, v. Hill, decided by the Supreme Court in 1967, involving Time's discussion of a play "The Desperate Hours" in which the Time magazine article stated that the play related to a tragedy suffered by Hill and his family.   The Court ruled against  James Hill - - - who was represented by future US President Richard Nixon - - - reversing the jury verdict in the family's favor while discussing the relationships between "fictionalization" and the First Amendment.

To the extent it is based in fact, an interesting comparison is journalist Ben McGrath's 2010 article, "Strangers on the Mountain" published in The New Yorker.  McGarth's piece centered upon the Ramapo Mountains, the people who live there, including the DeGroat family and so-called "Jackson Whites" and "Rampaough Indians," and a variety of legal issues, including criminal and environmental.

Yet it would seem that "Out of the Furnace" has a strong First Amendment claim unless the film loses its fictional patina, a prospect that seems unlikely.

Listed below are links to weblogs that reference Out of the Furnace? And Into the First Amendment: