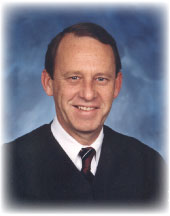 of the Southern District of Ohio issued a permanent injunction against a particular enforcement of Ohio's limitation of marriage to opposite sex couples.

Recall that in July, less than a month after the United States Supreme Court's decision in United States v. Windsor declaring DOMA unconstitutional, Judge Black enjoined Ohio's DOMA-type provisions (both statutory and in the state constitution) involving the recognition of a marriage that occurred out of state in an especially sympathetic situation involving a dying person.

In today's opinion, Judge Black - - - as he did in his previous opinion and as Judge Robert Shelby did in his opinion declaring Utah's ban on same-sex marriage unconstitutional - - - used Justice Scalia's dissent in Windsor as support:

In a vigorous dissent to the Windsor ruling, Justice Scalia predicted that the question whether states could refuse to recognize other states’ same-sex marriages would come quickly, and that the majority’s opinion spelled defeat for any state’s refusal to recognize same-sex marriages authorized by a co-equal state. As Justice Scalia predicted: “no one should be fooled [by this decision] ... the majority arms well any challenger to a state law restricting marriage to its traditional definition ... it’s just a matter of listening and waiting for the other shoe [to drop].” Windsor, 133 S. Ct. at 2710 (Scalia, J., dissenting).

The challenge before Judge Black is an as-applied-one relating to a specific couple, a death certificate, and an out of state marriage.

On the due process challenge, Judge Black concluded that "Ohio’s refusal to recognize same-sex marriages performed in other states violates the substantive due process rights of the parties to those marriages because it deprives them of their significant liberty interest in remaining married absent a sufficient articulated state interest for doing so or any due process procedural protection whatsoever."

On the equal protection challenge, Judge Black used a Carolene-type analysis to conclude that sexual orientation classifications merited heightened scrutiny.  However, he also decided that the Ohio marriage ban failed to satisfy even rational basis, both because animus was not a legitimate interest and because the non-animus legitimate interests asserted had no rational connection to Ohio's marriage recognition ban of same-sex couples.

Although the final injunction is limited to this particular couple and relates to the death of one of the partners, its reasoning could undoubtedly apply in a facial challenge.