In its unanimous opinion in Griego v. Oliver, the New Mexico Supreme Court has declared that the state must recognize same sex marriages.  The court found that

barring individuals from marrying and depriving them of the rights, protections, and responsibilities of civil marriage solely because of their sexual orientation violates the Equal Protection Clause under Article II, Section 18 of the New Mexico Constitution. We hold that the State of New Mexico is constitutionally required to allow same-gender couples to marry and must extend to them the rights, protections, and responsibilities that derive from civil marriage under New Mexico law. 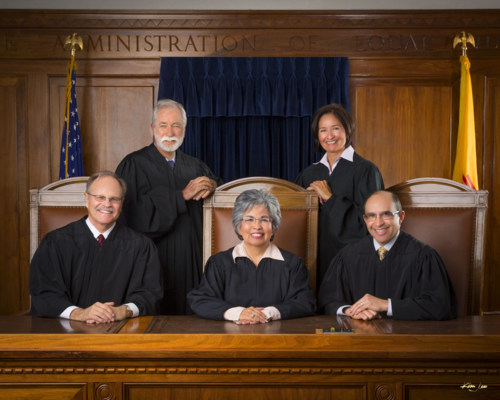 Interestingly, the court concluded that any prohibition of same-sex marriage raised a classification based on sexual orientation (and not sex), although its rationale raised the specter of the kind of formal equality at issue in Plessy v. Ferguson:

We do not agree that the marriage statutes at issue create a classification based on sex. Plaintiffs have conflated sex and sexual orientation. The distinction between same- gender and opposite-gender couples in the challenged legislation does not result in the unequal treatment of men and women. On the contrary, persons of either gender are treated equally in that they are each permitted to marry only a person of the opposite gender. The classification at issue is more properly analyzed as differential treatment based upon a person’s sexual orientation.

Nevertheless, the court found that the appropriate level of scrutiny was intermediate:

because the LGBT community is a discrete group that has been subjected to a history of purposeful discrimination, and it has not had sufficient political strength to protect itself from such discrimination. . . .  the class adversely affected by the legislation does not need to be “completely politically powerless, but must be limited in its political power or ability to advocate within the political system.”  Nor does intermediate scrutiny require the same level of extraordinary protection from the majoritarian political process that strict scrutiny demands. It is appropriate for our courts to apply intermediate scrutiny, “even though the darkest period of discrimination may have passed for a historically maligned group.”

The court notes that its "decision to apply intermediate scrutiny is consistent with many jurisdictions which have considered the issue," citing the Second Circuit in Windsor, as well as the same-sex marriage cases from Iowa and Connecticut.

The court found that the same-sex marriage ban did not survive intermediate scrutiny.  It considered three  governmental interests advanced for prohibiting same-gender couples from marrying in the State of New Mexico:

As to the last interest, the court noted that the defendants conceded there was no evidence that same-sex marriages would result in the deinstitutionalization of marriage, and the court implied this interest was "intended to inject into the analysis moral disapprobation of homosexual activity and tradition" and flatly rejected it.

As to procreation and child-rearing, the court rejected these interests as the governmental interests underlying New Mexico's marriage laws: "It is the marriage partners’ exclusive and permanent commitment to one another and the State’s interest in their stable relationship that are indispensable requisites of a civil marriage."  But the court also found that neither interest would be substantially served by the prohibition of mariage to same-sex partners.

Thus, by a relatively brief opinion (approximately 30 pages) the New Mexico Supreme Court has unanimously ruled that same-sex marriages must be allowed in the state.  Because the decision rests on the state constitution, it is not subject to review by the United States Supreme Court and   New Mexico becomes the 17th state to allow same-sex marriages on the same terms as other marriages.

I have never understood the rationale for intermediate scrutiny in an equal protection context. A government classification based on race now receives strict scrutiny, even if the racial classification is adopted by a government of mostly white legislators, and burdens white persons (an affirmative action program for students who are not white, e.g.) A government classification based on gender (or sex) is subject to intermediate scrutiny, so that in the past at least, programs excluding women from certain government jobs (adopted by primarily male legislators) were subjected to intermediate scrutiny. Yet neither race nor gender has historically been regarded as a matter of personal choice, and both non-white racial groups and women have historically been subject to oppression. People of color and women can now both vote. What difference between race and gender justifies a lower standard of review for discrimination based on gender? I have the same question as to gender-orientation. Race, gender, and gender-orientation are all immutable characteristics that have historically triggered government oppression. Is the level of scrutiny applicable somehow a product of the courts' judgment about how bad the oppression was? Or is application of intermediate scrutiny for some classifications a reflection of the ongoing prejudice judges have (unconsciously or not) as to women and homosexuals?