Is it lawful for a Christian hotel keeper, who sincerely believes that sexual relations outside marriage are sinful, to refuse a double-bedded room to a same sex couple? Does it make any difference that he couple have entered into a civil partnership?

This is essentially the question presented in the UK Supreme Court's opinion in Bull v. Hall involving the Chymorvah Hotel in Cornwall, pictured below. 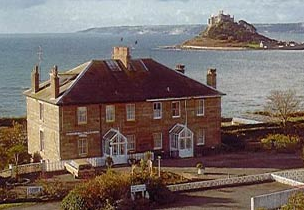 The main opinion, authored by the twelve justice Court's only woman member, Lady Hale, affirms the lower court's finding that the same-sex couple's equality claims must prevail.  While the decision is unanimous, some justices wrote separately because of differing on the rationale, including whether the discrimination should be deemed direct or indirect.  These differences resulted from highlighting sexual orientation or highlighting marital status, with the added wrinkle of civil partnership being equivalent to marriage.

This "rights of others" qualification is key to the Lady Hale's analysis, as these rights  include rights under "ordinary law," including UK's regulatory framework that prohibits discrimination.

But, as Lady Hale makes clear, it is not a matter of sexual orientation discrimination trumping religious discrimination.  Instead:

While the UK Supreme Court did cite cases from other jurisdictions, it sometimes noted that they occurred in a "different constitutional context."

In the United States, the constitutional context pits First Amendment rights of free exercise of religion against Equal Protection rights based on sexual orientation.  When the sexual orientation rights of equality have been statutory, the United States Supreme Court has clearly held that the First Amendment interests prevail, as in Boy Scouts of America v. Dale (2000) and Hurley v. Irish-American Gay, Lesbian and Bisexual Group of Boston, Inc. (1995).  However, with the constitutional recognition afforded same-sex marriage last term in United States v. Windsor under the equal protection component of the Fifth Amendment in the challenge to DOMA (Defense of Marriage Act), the legal landscape has altered.

Interestingly, the petition relies upon the compelled speech doctrine, arguing that requiring Elane Photography, a wedding photographer to photograph a same-sex wedding would be to require her to "create expressive images" that conveyed messages that conflict with her religious beliefs and therefore violates the First Amendment doctrine of compelled speech.  The petition heavily relies upon Wooley v. Maynard (19977) the New Hampshire "leave free or die" license plate case. As Lyle Denniston notes, the case "does not ask the Court to rule on any right of gays and lesbians to marry" and NM presently does not either prohibit or allow same-sex marriage.

Listed below are links to weblogs that reference UK Supreme Court Confronts Clash Between Freedom of Religion and Gay Equality: Is the Issue Coming to The US Supreme Court Soon?:

Is the issue already there? Isn't it Hobby Lobby?