In its opinions in excess of 150 pages in the consolidated cases of Korte v. Sebelius and Grote v. Sebelius, a divided panel of the Seventh Circuit has (again) entered the fray regarding the claim of secular for-profit corporations that rights of religious freedom have been infringed by the (PP)ACA's so-called contraception mandate.  We've discussed the complicated landscape here, and specific cases such as the divided DC Circuit's opinion in Gilardi v. HHS, by the Sixth Circuit in  Eden Foods v. Sebelius and Autocam Corp. v. Sebelius,  by the divided Third Circuit in Conestoga Wood Specialties Corp. v. Secretary of HHS,  and, of course, in the divided en banc opinion of the Tenth Circuit in Hobby Lobby, presently before the United States Supreme Court on a petition for writ of certiorari.

In this consolidated opinion in Korte and Grote, the majority of the Seventh Circuit panel - - - in an opinion authored by Judge Diane Sykes and joined by Judge Joel Flaum - - - reiterated its previous views and its previous divide - - - with Judge Ilana Diamond Rovner again dissenting - - - now that the  "appeals have now been briefed and argued and are ready for decision."

These cases—two among many currently pending in courts around the country—raise important questions about whether business owners and their closely held corporations may assert a religious objection to the contraception mandate and whether forcing them to provide this coverage substan- tially burdens their religious-exercise rights.  We hold that the plaintiffs—the business owners and their companies—may challenge the mandate. We further hold that compelling them to cover these services substantially burdens their religious- exercise rights. Under RFRA the government must justify the burden under the standard of strict scrutiny. So far it has not done so, and we doubt that it can. Because the RFRA claims are very likely to succeed and the balance of harms favors protect- ing the religious-liberty rights of the plaintiffs, we reverse and remand with instructions to enter preliminary injunctions barring enforcement of the mandate against them. 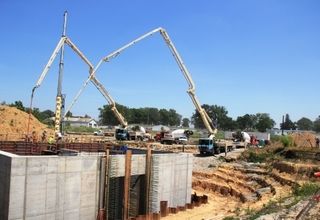 Korte & Luite Johan Contractors, Inc., is general contractor in Illinois, employing about 90 full-time employees, 70 of whom belong to a union that sponsors their health-insurance plan, and 87% of the stock is owned by Cyril and Jane Korte, who describe themselves as devout Roman Catholics.  Interestingly, as the opinion relates, in August 2012, the

Kortes discovered that their then-existing health plan covered sterilization and contraception—coverage that they did not realize they were carrying. Because providing this coverage conflicts with their religious convictions, they began to investigate alternative health-care plans with the intention of terminating their existing plan and substituting one that conforms to the requirements of their faith.

But, they now argue, the ACA's contraception mandate stands in their way.  Also interestingly, although not in the court's opinion, the Korte company has been awarded the contract to renovate the Illinois Supreme Court building, in a contract for more than 7 million dollars.

The Grotes include six individual plaintiffs who own and manage Grote Industries, Inc., a manufacturer of vehicle safety systems headquartered in Indiana, having 1,148 full-time employees at various locations, including 464 in the United States, and providing a health-care plan that is self-insured.

The opinions and analysis are extensive, but they provide little that is different from their previous opinions or from other courts' opinions, with the exception of dissenting Judge Rovner's hypotheticals discussed below.  The majority's analysis on the individual plaintiffs focuses on standing and there is no resort to the "pass through" test that some other courts have used.  Regarding RFRA, the majority relies on the Dictionary Act's definition of "person," and concludes that covering corporations within RFRA is not a "poor fit," indeed,

The majority uses a series of First Amendment Free Exercise Clause cases, including Sherbert v. Verner, the Seventh Day Adventist employee seeking workers' compensation benefits, and Braunfeld v. Brown, the "Jewish merchants" challenging a Sunday-closing law, to conclude that such" cases show that far from categorically excluding profit-seekers from the scope of the free-exercise right, the Supreme Court has considered their claims on the merits, granting exemptions in some and not others based on the compelling-interest test."

Dissenting, Judge Rovner contends that while her "esteemed colleagues have made the best case possible for the notion that the contraception mandate interferes with the plaintiffs’ free exercise rights," she believes that the majority's  "holding and rationale represent an unprecedented and unwarranted re-conception of both what the free exercise of religion entails and what constitutes a substantial burden on that exercise," because the majority "extends a highly personal right to a secular corporation, a man-made legal fiction that has no conscience enabling belief or worship."  She continues regarding the substantial burden - - - or what she sees as a lack therefof - - - and  notes that the majority "permits the plaintiffs to invoke their free exercise rights offensively rather than defensively, in a way that circumscribes the rights Congress has given to employees, by permitting the corporate employers to rewrite the terms of the statutorily- mandated health plans they provide to their employees."

Judge Rovner's opinion is most provocative - - - and probably most useful for Constitutional Law Professors - - - in providing three hypotheticals worth considering. [Update: discussion of hypotheticals here].

Listed below are links to weblogs that reference Seventh Circuit on Corporations as Possessing Religious Freedom and ACA's Contraception Mandate :