Oral Arguments in Town of Greece v Galloway: Can the Town Council Ask Those Attending to Bow Their Heads and Pray?

The Court today heard oral arguments in Town of Greece v. Galloway regarding a New York town's practice of opening its council meetings with prayers, the large majority of which have been Christian. 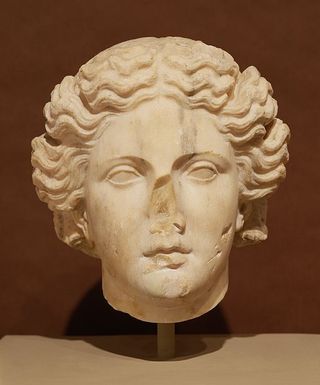 Head of Apollo,
Attributed to Kephistodotos the Elder
(active early 4th century B.C.)
Recall that the unanimous panel opinion of the Second Circuit held that the town meetings practice of legislative prayer since 1999 "impermissibly affiliated the town with a single creed, Christianity" and violated the First Amendment's Establishment Clause.  The case has attracted much attention - - - a great PBS  video is here - - -  and in a move that surprised some, the Obama Administration filed a brief in support of the town.

Doctrinally, the arguments centered on an application of Marsh v. Chambers (1983), in which the Court upheld the constitutionality of the Nebraska legislature's employment of a chaplain to lead a legislative prayer.  The majority opinion, authored by Chief Justice Burger, was seemingly not worried that the same chaplain had been employed for almost two decades, and relied upon the historical practice of legislative prayer.  Among the many references to Marsh in the argument and its reliance on history is this one with (ConLawProf) Douglas Laycock, representing the challengers to the prayer, after some laughter:

JUSTICE KENNEDY: I mean, I'm serious about this. This involves government very heavily in religion.

MR. LAYCOCK: Well, government became very heavily involved in religion when we decided there could be prayers to open legislative sessions. Marsh is the source of government involvement in religion. And now the question is how to manage the problems that arise from that.

JUSTICE ALITO: Well, Marsh is not the source of government involvement religion in this respect. The First Congress is the source.

MR. LAYCOCK: Fair enough. The tradition to which Marsh points.

Yet another possible distinction from Marsh is the Town of Greece town council is a "hybrid" body which has administrative function and persons appearing before it who are seeking specific relief, as well as being local.  Justice Ginsburg complimented the Deputy Solicitor General, who argued as amicus curiae, supporting the Town of Greece, for being "quite candid" about this quality and stating that it would be proper to have "certain checks" in that setting.   But the nature of those checks preoccupied the arguments.   Does it matter how far the prayer and the "hearing" are separated in time?  Should there be guidelines for those giving the prayers - - - and how much does this involve (entangle) the government in religious matters?  Does it matter if the attendees are asked to show their hands if they personally feel in need of prayer?  (To which Justice Scalia interjected, "That's not a prayer.")   Additionally, there was little satisfaction with either the coercion or endorsement tests, and the (in)famous Lemon test made no appearance at all.

For some Justices, prayer as practiced in the Town of Greece council meetings seemed deeply troubling.  For example, Justice Kagan quickly interrupted Thomas Hungar, arguing on behalf of the town:

JUSTICE KAGAN: Mr. Hungar, I'm wondering what you would think of the following: Suppose that as we began this session of the Court, the Chief Justice had called a minister up to the front of the courtroom, facing the lawyers, maybe the parties, maybe the spectators. And the minister had asked everyone to stand and to bow their heads in prayer and the minister said the following: He said, we acknowledge the saving sacrifice of Jesus Christ on the cross. We draw strength from His resurrection. Blessed are you who has raised up the Lord Jesus. You who will raise us in our turn and put us by His side. The members of the Court who had stood responded amen, made the sign of the cross, and the Chief Justice then called your case.

During his rebuttal argument, Mr. Hungar's attempt to demonstrate the town was not sectarian in its prayer was less than successful for Justice Sotomayor:

JUSTICE SOTOMAYOR:  One a year.

JUSTICE SOTOMAYOR: Four additional people after the suit was filed.

JUSTICE SOTOMAYOR:  One a year.

JUSTICE SOTOMAYOR:  How often does the legislature meet?

It was clear that several of the Justices found this as unacceptable as the Second Circuit had.  Yet how and where to draw the lines engendered little agreement.

Listed below are links to weblogs that reference Oral Arguments in Town of Greece v Galloway: Can the Town Council Ask Those Attending to Bow Their Heads and Pray?:

In Everson v. Board of Education, 330 U.S. 1 (1947), the Supreme Court declared that the Establishment Clause prevents governments from doing things "that aid one religion, aid all religions or prefer one religion over another." If the plaintiffs prevail in the Town of Greece case, there will still be prayers at town council meetings but they won't be exclusively or primarily Christian. There will still be prayers but the prayers will be nonsectarian. Nonsectarian prayers constitute government support for "all religions" and that is just as unconstitutional as a governmental preference for Christianity, according to the language of the Everson case.