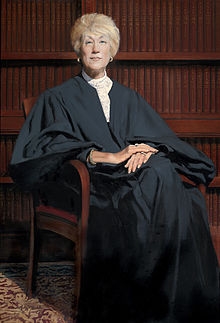 In a brief opinion , a panel of the United States Court of a Appeals for the Second Circuit - - -John M. Walker, Jr, José A. Cabranes, and Barrington D. Parker - - - have issued a stay of the decisions of District Judge Shira Scheindlin (pictured right)  in Floyd v. City of New York and in Ligon v. City of New York, In both cases, Judge Scheindlin essentially found that the NYPD's implementation of stop and frisk violated equal protection.

The Second Circuit not only stayed the decisions, but also remanded the cases with the order they be assigned to a different judge:

Upon review of the record in these cases, we conclude that the District Judge ran afoul of the Code of Conduct for United States Judges, Canon 2 (“A judge should avoid impropriety and the appearance of impropriety in all activities.”); see also Canon 3(C)(1) (“A judge shall disqualify himself or herself in a proceeding in which the judge’s impartiality might reasonably be questioned . . . .”), and that the appearance of partiality surrounding this litigation was compromised by the District Judge’s improper application of the Court’s “related case rule,” see Transfer of Related Cases, S.D.N.Y. & E.D.N.Y. Local Rule 13(a), [footnote 1] and by a series of media interviews and public statements purporting to respond publicly to criticism of the District Court. [footnote 2].

In support, the opinion's footnote 1 provides:

In a proceeding on December 21, 2007 involving the parties in Daniels v. City of New York, No. 99 Civ. 1695 (S.D.N.Y. filed Mar. 8, 1999), the District Judge stated, “[I]f you got proof of inappropriate racial profiling in a good constitutional case, why don’t you bring a lawsuit? You can certainly mark it as related.” She also stated, “[W]hat I am trying to say, I am sure I am going to get in trouble for saying it, for $65 you can bring that lawsuit.” She concluded the proceeding by noting, “And as I said before, I would accept it as a related case, which the plaintiff has the power to designate.” Two of the attorney groups working on behalf of plaintiffs in Daniels, a case challenging the New York Police Department’s stop-and-frisk practices, helped file Floyd the next month. See generally Joseph Goldstein, A Court Rule Directs Cases Over Friskings to One Judge, N.Y. Times, May 5, 2013.

While the Second Circuit's panel opinion includes the disclaimer that the judges "intimate no view on the substance or merits of the pending appeals, which have yet to be fully briefed and argued," it certainly expresses deep disapproval.

*UPDATE:  See Toobin's response to the ruling and use of the article he authored here

Listed below are links to weblogs that reference Second Circuit Stays Stop and Frisk Opinion and Removes District Judge :