Today's oral arguments before the United States Supreme Court in Schuette v. Coalition to Defend Affirmative Action, Integration and Immigrant Rights and Fight for Equality By Any Means Necessary (BAMN) raised a raft of interesting hypotheticals, including this question: Is the Michigan's state constitution's equal protection clause, which mirrors the federal one, itself unconstitutional under the Fourteenth Amendment's Equal Protection Clause.

Of course, the issue before the Court involves a different provision of Michigan's Constitution: Prop 2, adopted by voter referendum in 2006, and now Art I §26 of the state constitution. 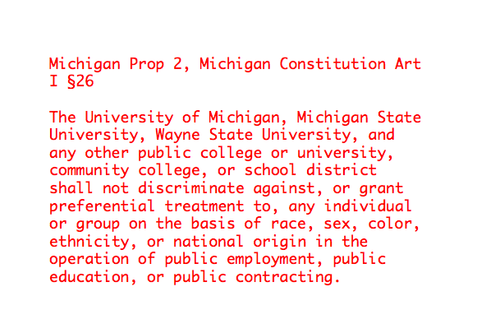 The referendum occurred subsequent to the Court's upholding of Michigan University School of Law's affirmative action policy in Grutter v. Bollinger, even as the Court held unconstitutional the plan of the large undergraduate university as not sufficiently narrowly tailored.

Recall that the en banc Sixth Circuit majority in Coalition to Defend Affirmative Action v. Regents of the University of Michigan relied upon the so-called "political process" aspect of the Equal Protection Clause which asks whether a majority may vote to amend its constitution to limit the rights of a minority to seek relief, relying on Washington v. Seattle Sch. Dist. No. 1, 458 U.S. 457 (1982) and Hunter v. Erickson, 393 U.S. 385 (1969).

The oral argument reflected a deep suspicion of the political process rationale, with the most serious questioning being directed at what the limits to such a doctrine might be.  Justice Alito returned to the issue several times, posing various hypotheticals about faculty admissions plans that might be overruled by a dean or president of the university.  Or maybe, he continued,

Later in the rebuttal argument of the Petitioner, Justice Alito suggested an answer to his own question:

Indeed, this was exactly the rationale of the en banc Sixth Circuit's majority opinion, as the opening passages to that opinion illustrated.

And Justice Kennedy, seemingly in his role as a "swing vote" - - - although Justice Kagan is recused - - - seemed to share the specific concerns of how to draw a line in the cases.

Justice Scalia certainly did not seem inclined to worry about drawing lines or allocations of power.  Indeed, he rejected the notion that Prop 2, now Article I §26 of the Michigan Constitution - - - despite its textual "on its face" use of a race - - - made a racial classification.  He chastised Mark Rosenblum, arguing on behalf of some of the respondents, for referring to Prop 2 as including a "facial racial classification":

JUSTICE SCALIA: It's not a racial classification. You should not refer to it that way.

JUSTICE SCALIA: It's the prohibition of racial classifications.

MR. ROSENBAUM: No, Your Honor.

In that sense, the 14th Amendment itself is a racial classification, right?

To which Rosenbaum replied that he was using the Fourteenth Amendment itself as measurement.  Yet this theme recurred, and had been part of the Petitioner's opening argument, including references to Michigan's equal protection clause. 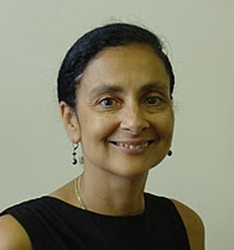 Scalia also outright dismissed an appeal to originalism.  When Shanta Driver (pictured right) on behalf of Coalition to Defend Affirmative Action, Integration, and Immigrant Rights and Fight for Equality by Any Means Necessary (and who is its National Chair), began her argument asking the Court to affirm the Sixth Circuit and "to bring the 14th Amendment back to its original purpose and meaning, which is to protect minority rights against a white majority, which did not occur in this case," Scalia interjected:

JUSTICE SCALIA: My goodness, I thought we've -- we've held that the 14th Amendment protects all  races. I mean, that was the argument in the early years, that it protected only -- only the blacks. But I thought we rejected that. You -- you say now that we have to proceed as though its purpose is not to protect whites, only to protect minorities?

And Justice Roberts surfaced the position that affirmative action was actually a detriment to those it sought to benefit, echoing some of the arguments in Thomas's dissent in Fisher, such as the so-called "mismatch theory."

Thus, while the arguments sometimes sought to distance themselves from the affirmative action battles that the Court re-engaged last term in Fisher v. UT, certainly Schuette v. Coalition to Defend Affirmative Action is another such battle, albeit on slightly different doctrinal terrain.  It seems unlikely that it will have a different ultimate outcome.

Listed below are links to weblogs that reference Oral Arguments in Schuette v. Coalition to Defend Affirmative Action on Michigan's Prop 2:

How do we apply the Sixth Circuit's reasoning to laws that ban racial segregation by the government?

It is important to remember that Brown v. Board of Education, 347 U.S. 483 (1954), did not sweep away all racial segregation nationwide. Brown only overruled Plessy v. Ferguson, 163 U.S. 537 (1896) to the extent it applied to public education. 347 U.S. at 495. Under current Supreme Court precedent, the 14th Amendment permits the state to racially segregate other facilities like parks and rail cars. Any lower court hearing such a challenge must follow Plessy, because the Supreme Court never struck down racial segregation as a violation of the 1r4th Amendment outside the public education context.

Thus, if a state banned racially segregated streetcars in local public transportation, it would require segregationists to appeal to at least the legislature (if not the state's constitutional amendment process), instead of the local government to obtain their preference for racially segregated streetcars. And under the Sixth Circuit's reasoning, this restructures the political process to disfavor segregationists from obtaining a racial preference still permitted by the 14th Amendment. (Again, Brown is only applicable to public education.) And as such, a state banning especially segregated street cars in local public transportation violates equal protection under Sixth Circuit precedent.