Not So Fast Nadon: The Supreme Court of Canada's Would-Be Justice On Hold

As we discussed when we reported that Marc Nadon had been nominated to be the newest Justice on the Supreme Court of Canada, there existed a constitutional question regarding whether a judge on the Federal Court of Appeal was eligible for the Supreme Court. 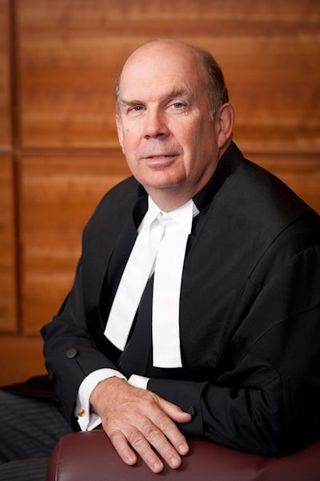 Marc Nadon, Portrait (prematurely?) on the Supreme Court of Canada website
It's a complex issue, especially for those not steeped in Canadian constitutional law, but luckily Canadian ConLawProfs Michael Plaxton and Carissima Mathen have made available on ssrn their excellent paper, Purposive Interpretation, Quebec, and the Supreme Court Act.

They set out the facts at the beginning of their discussion:

The Supreme Court of Canada action is now docketed here.

Section 5 of the Supreme Court Act states: “Any person may be appointed a judge who is or has been a judge of a superior court of a province or a barrister or advocate of at least ten years standing at the bar of a province.” Section 6 provides: “At least three of the judges shall be appointed from among the judges of the Court of Appeal or of the Superior Court of the Province of Quebec or from among the advocates of that province.” Mr Justice Nadon was, at the time of his nomination, neither a judge of a Quebec superior court nor a current member of the practicing bar. It is therefore not clear that he is “among the advocates” of Quebec within the meaning of section 6.

Ultimately, they conclude that the argument in favor of Nadon's eligibility privileges section 5 over section 6, with its purpose "to protect the authority and legitimacy of the Court in the eyes of Quebec citizens, advocates and jurists."

This controversy over eligiblity has certainly eclipsed the earlier concerns regarding Nadon's appointment contributing to the lack of gender balance and representation on the Court.

Listed below are links to weblogs that reference Not So Fast Nadon: The Supreme Court of Canada's Would-Be Justice On Hold: