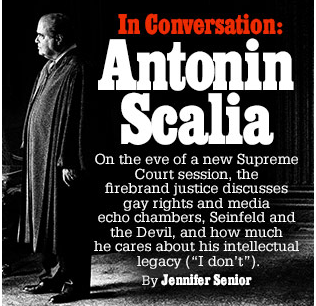 Justice Scalia previously gave a brief interview to New York Magazine on "his childhood," and this week's magazine has an extensive interview with Jennifer Senior about almost everything else.

What newspapers does he read?  Is he softening on his views of homosexuality?  Does he believe in hell and the devil?  Are women protected by the Fourteenth Amendment?  What are his hobbies other than hunting?  His television viewing? Favorite novels?

Probably the most wrenching was Morrison v. Olson, which involved the independent counsel. To take away the power to prosecute from the president and give it to somebody who’s not under his control is a terrible erosion of presidential power. And it was wrenching not only because it came out wrong—I was the sole dissenter—but because the opinion was written by Rehnquist, who had been head of the Office of Legal Counsel, before me, and who I thought would realize the importance of that power of the president to prosecute. And he not only wrote the opinion; he wrote it in a manner that was more extreme than I think Bill Brennan would have written it. That was wrenching.

But later, he comes back to the opinion:

As to which is the most impressive opinion: I still think Morrison v. Olson. But look, we have different standards, I suppose, for what’s a great opinion. I care about the reasoning. And the reasoning in Morrison, I thought, was devastating—devastating of the majority. If you ask me which of my opinions will have the most impact in the future, it probably won’t be that dissent; it’ll be some majority opinion. But it’ll have impact in the future not because it’s so beautifully reasoned and so well written. It’ll have impact in the future because it’s authoritative. That’s all that matters, unfortunately.

It's not what he terms his most "heroic" decision, however, reserving that for a very different sort of opinion.

From the case involving Vice-­President Cheney, with whom you’d gone hunting?

Scalia's 2004 Memorandum in Cheney v. United States District Court for the District of Columbia is here and a good discussion of the controversy from Michael Dorf is here.

Given the standards of recusal - - - despite continuing controversies - - - there is little reason that Scalia or any other Supreme Court Justice should not give as many interviews as possible, even if they might reveal "bias."

Dahlia Lithwick over at Slate has an excellent analysis of the interview, including asking for the interviewer's perceptions about the interview: Are Jennifer Senior and Justice Scalia as far apart as they seem?

I asked Senior whether this [perception] felt accurate. She replied, “It's embarrassing, but the overlap between our worlds is almost nonexistent. It explains why the left and the right both responded so enthusiastically to this piece. Each side sees its own view, affirmed. One sees a monster and the other sees a hero. It's extraordinary, actually. The O'Reilly constituents think he's speaking sense; the Jon Stewart vote thinks virtually everything the guy says is nuts.”

Listed below are links to weblogs that reference Daily Read: Justice Scalia Interview: