Daily Read: That Shutdown? It's the Constitution's Fault

Who to blame for the lapse of appropriations, also known as the government "shutdown"?

it's James Madison's fault. This week's shutdown is only the latest symptom of an underlying disease in our democracy whose origins lie in the Constitution and some supremely misguided ideas that made their way into it in 1787, and found their fullest exposition in Madison's Federalist no. 51. And that disease is rapidly getting worse.

while it is clear in the U.K. who is to blame for poor economic performance, it's far more difficult for American voters to sort out who's responsible. So they just hold to account whoever they get to vote on first. That leads to more or less random shifts in sentiment, with divided government and ensuing deadlock and crises, which makes assigning blame and holding members to account even more difficult.

Matthews isn't the only one over at WAPo holding up the UK as exemplar.  Max Fisher explains that "Australia had a government shutdown once. In the end, the queen fired everyone in Parliament."  He ends with this arch interrogatory: "Maybe, if we ask nicely, Britain will take us back?" 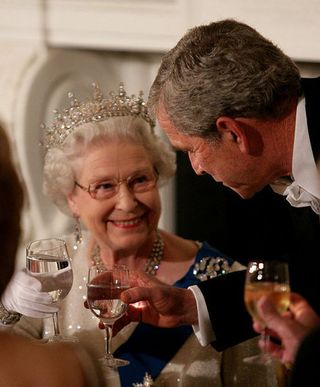 Queen Elizabeth II on a visit to the United States in 2007, with President George W. Bush.

Listed below are links to weblogs that reference Daily Read: That Shutdown? It's the Constitution's Fault :

So, according to House Republicans who have shut down the government, the framers who crafted Article I, Section 7 to require express, tripartite approval of a bill before it could become law, and required a 2/3rds majority of the House and Senate to override a presidential veto, also gave the House the unilateral power to veto a legally enacted bill, merely by withholding funding. Testing the limits of presposterousness even further, House Republicans act as though the founders who so carefully described the Article I, Section 7, separation of powers also intended to allow a single House to shut down and dismantle the government completely--and potentially forever. If somebody with standing could sue, certainly the preposterous internal constitutional contradiction on which the Republicans rely is ripe for judicial review.