Marc Nadon, nominated by Canada's Prime Minister Stephen Harper (and not subject to a US-type of confirmation process), will soon ascend to Supreme Court of Canada.

Nadon's nomination posed many issues.  Constitutionally, a question was whether a judge on the Federal Court of Appeal was eligible for the Supreme Court.  Here's one opinion (procured before the announcement) laying out the issues and concluding eligibility.  The problem and conclusion could have applied to other jurists, and indeed there was some speculation that the nominee would be someone else: a woman.  Canada's Supreme Court now only has three women and Nadon is the fifth man Harper has appointed to the Court. 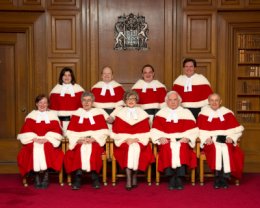 The Globe and Mail has a good article about Nadon, with quotes from law professors; the article in the Toronto Star has a good discussion of his decisions; and the National Post provides "ten things to know" about him.

He is widely viewed as conservative, based on a few of his rulings as a judge on the Federal Court of Appeal, including a Guantanamo case and a rejection of parental leave for adoptive mothers.  (The latter case was compellingly critiqued by Brenda Cossman here).

The Supreme Court of Canada has a mandatory retirement age for justices of 75.