In its opinion in Demers v. Austin, a panel of the Ninth Circuit this week explicitly ruled that First Amendment claims concerning "teaching and writing on academic matters by teachers employed by the state" are not governed by the Court's decision in Garcetti v. Ceballos.  Decided in 2006, Garcetti denied First Amendment protections to a prosecutor who testified for the defense regarding his misgivings about the veracity of an affidavit used to obtain a search warrant and then suffered adverse employment actions.  Garcetti has made First Amendment claims arising from a course of employment exceedingly difficult to sustain, a situation the Court seems disinclined to revisit.

The Ninth Circuit held that rather than being subject to an analysis under Garcetti, "teaching and writing by publicly employed teachers is governed by Pickering v. Board of Education, 391 U.S. 563 (1968)."

Under Pickering, the employee's speech must be a matter of "public concern."  Professor Demers' speech, for which he alleged he was retaliated against, consisted (at least in part) of a two page pamphlet, "The 7-Step Plan for Making the Edward R. Murrow School of Communication Financially Independent." 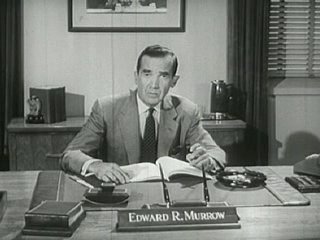 Named for the famous journalist (pictured above), the school as part of the Washington State University system, was in flux;  Demers distributed the plan while he was a on the Murrow School’s “Structure Committee,” which was actively debating the issues.  The Ninth Circuit stated:

protected academic writing is not confined to scholarship. Much academic writing is, of course, scholarship. But academics, in the course of their academic duties, also write memoranda, reports, and other documents addressed to such things as a budget, curriculum, departmental structure, and faculty hiring. Depending on its scope and character, such writing may well address matters of public concern under Pickering.

Because Demers' pamphlet "made broad proposals to change the direction and focus of the School," rather than voicing "personal complaints," and because Demers' widely disseminated the document (including sending it to newspapers [as in Pickering] and posting it on his website), the panel found it was a matter of public concern.

Nevertheless, Demers was entitled to scant relief because the Ninth Circuit panel also held that the Defendants were entitled to qualified immunity: the Defendants certainly reasonably could have believed that their conduct was lawful “in light of clearly established law and the information [that they] possessed.”  Indeed, because the panel acknowledged it was breaking new ground, it could not have held otherwise.  But the panel did note that qualified immunity did not preclude injunctive relief.

This is an important opinion recognizing academic freedom under the First Amendment.  At a relatively brief 26 pages, it is nevertheless closely reasoned both doctrinally and in its application.

And its sure to be at issue should the disciplining of the professor for a  political "rant" we discussed earlier this week be litigated.