Michigan, like most states, has a vanity license plate program under which residents can apply for a "personalized" letter or number combination rather than being randomly assigned one, upon the payment of an additional fee.   Under M.C.L. § 257.803b(1), the secretary of state "shall not issue a letter combination that might carry a connotation offensive to good taste and decency."

In the complaint filed in Matwyuk v. Johnson, the plaintiff, represented by the ACLU of Michigan, alleges that the secretary of state's office denied his application for "INFIDEL" (or some variation) because it was "offensive to good taste and decency."   The plaintiff claims the "offensive to good taste and decency" provision on its face and as applied violates the First Amendment as overbroad and the Due Process Clause of the Fourteenth Amendment as vague.

Mr. Matwyuk is a retired U.S. Army sergeant who was deployed as an American soldier in Iraq during the height of hostilities in that country. He and his fellow troops were constantly under attack by insurgent extremists whose word for the American soldiers was “infidel.” Seeking to reclaim or reappropriate this term as a source of American pride and patriotism, Sergeant Matwyuk and other soldiers came to embrace their identity as “infidels.” He and other American veterans proudly refer to themselves as “infidels” as a reminder of the bond they share as survivors of a bloody war in a hostile part of the world.

To honor the sacrifices of his fellow soldiers and to express his pride and patriotism as a veteran of the war in Iraq, Sergeant Matwyuk wishes to obtain a personalized Michigan license plate that reads “INFIDEL" . . . . 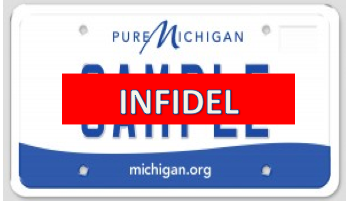 Listed below are links to weblogs that reference First Amendment Challenge to Vanity License Plate Denial: