Daily Read: An Example of a Secret Ruling

As the headline in the Miami Herald article proclaims, "Guantánamo judge makes secret ruling on secret motion in secret hearing."

Released today, on the twelfth anniversary of September 11 tragedy, is a transcript of an August  hearing relating to the September 11 co-conspirators.  It's worth a read - - - or perhaps "a look" would be more accurate. 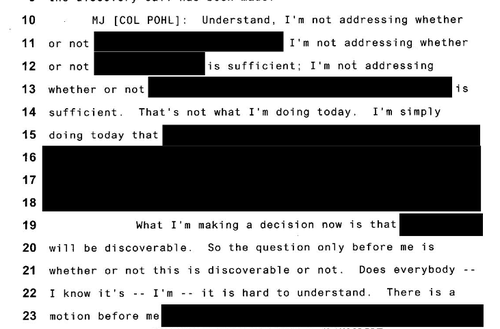 However, it does become clear that the Prosecution sought to prevent "something" from discovery by defense counsel and that the judge decided in favor of defense counsel representing the September 11 co-conspirators.

Listed below are links to weblogs that reference Daily Read: An Example of a Secret Ruling :