In her commentary "Why Lawyers Become Bad Leaders" at the Chronicle of Higher Education, Deborah Rhode has several arguments supporting her position, but of great interest to ConLawProfs is her use of prominent lawyers Ted Olson and David Boies (pictured below)  in the Proposition 8 litigation as a "case study in the limitations of lawyers as leaders." 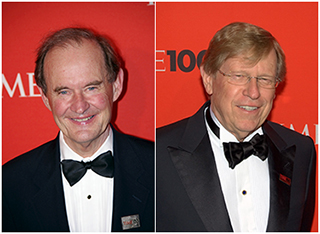 Should Boies and Olson be so celebrated?

Rhode notes that they were hired by a political strategist and a Hollywood producer to challenge Prop 8, and although they knew that leaders of gay-rights organizations were opposed to a federal challenge to Prop 8, they did not consult them before filing suit.  She then discusses some of the issues with their litigation, noting "Olson and Boies clearly had something to gain from being lead counsel in a case of such prominence."  Recall that even before the case reached the Supreme Court, the trial garnered much attention.   Rhode writes:

Boies and Olson pursued a high-risk strategy against the advice of groups that had the greatest expertise and stake in the outcome. Most observers believe that a low-risk strategy of challenging Prop 8 at the ballot box would have been successful, as polls suggested that California voters had changed their views on the ban. Such a strategy would have exposed the gay-rights movement to less risk of an adverse Supreme Court precedent while accomplishing the same result.

That is not to deny the accomplishments of Boies and Olson as litigators, the advantages of having a prominent conservative like Olson supporting gay marriage, or the social commitments that underpinned their actions. But it is to underscore the difference between effective lawyers and effective leaders.

A quality of successful leadership is the capacity to work collaboratively. The most-effective leaders are those who can see past their own ambitions and desire for limelight.

Rhode's article is worth a read - - - and much consideration.

Listed below are links to weblogs that reference Daily Read: Deborah Rhode on Lawyers as Leaders - - - And Constitutional Litigation: