President Lyndon B. Johnson’s Great Society and Beyond:
The Historical and Contemporary Implications of Progressive Action and Human Fulfillment
Honoring and Critiquing the 50th Anniversary of Johnson’s Vision 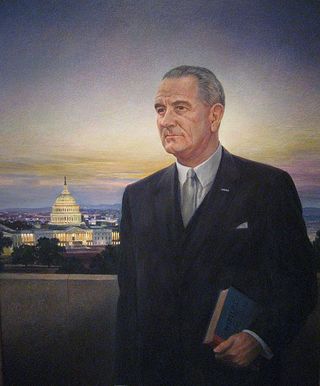 In May 1964, President Lyndon Baines Johnson unveiled his revolutionary plans for the Great Society.  As he explained it, Americans “have the opportunity to move not only toward the rich society and the powerful society, but upward to the Great Society. . . .  The Great Society rests on abundance and liberty for all. It demands an end to poverty and racial injustice.”

According to Doris Kearns Goodwin, who wrote Lyndon Johnson and the American Dream, Johnson’s Great Society would be based on “progressive action” and the “possibilities for human fulfillment.”  This action and fulfillment meant that regaining control of our society required us to end policies that threatened and degraded humanity.

Johnson’s Great Society reforms, included the Voting Rights Act of 1965, Medicare, Medicaid, Equal Opportunity Act, Elementary and Secondary Education Act, Social Security expansion, the Earned Income Tax Credit, the Higher Education Act, Head Start, the Civil Rights Act of 1964, the Housing and Urban Development Act of 1965, and the Open Housing Act of 1968.  These laws extended and expanded the Bill of Rights and continued and expanded the programs initiated in Roosevelt’s New Deal of the 1930s and Truman’s Fair Deal in the late 1940s and early 1050s.  As a result of LBJ’s programs, America’s official poverty rate declined throughout the 1960s, reaching a low of 11.2 percent in 1974, down from 19 percent in 1964, and most recently settling at 15.1 percent in 2010.  According to Dylan Matthews, who wrote Poverty in the 50 Years Since ‘The Other America,’ in Five Charts, Johnson’s Great Society programs, which included the War on Poverty, “made a real and lasting difference.”  Moreover, according to Demos, an estimated 40 million Americans avoided official poverty due to such programs as food stamps and Medicaid.

Unfortunately, what is also true is that the Vietnam War, which Johnson escalated and only at the end of his administration moved to end, crippled his domestic economic policies and undermined his goals for true racial equality.   Despite the War on Poverty and dramatic changes in Civil Rights, racially concentrated poverty remains with us.  Since the Johnson years, America has weathered the recessions of the 1980s and early 1990s, the late ‘90s dot com bubble, our current recession, the national security encroachment on civil liberties, the rise and fall of the Occupy Movement, the waning of the Arab Spring, and two middle east wars since 9-11.

It is clear that Johnson’s Great Society programs have saved millions of Americans from the depth of official poverty.  It also true that Johnson’s vision, to which he was truly committed, staggered and failed when the civil rights movement dovetailed with political marginalization, economic inequality, pervasive racial discrimination, and imperialist policies.  The Moynihan Report, the Watts Riots and urban unrests, and the emotional and financial suck of Vietnam prevented Johnson from deeply redressing America’s lingering poverty.

At MAPOC 2014, we intend to explore the furthest implications of President Johnson’s domestic and foreign policies, especially the impact of these policies on progressive action and human fulfillment, as we collectively explore and analyze the contemporary implications of Johnson’s Great Society.  From these implications, the conference planning committee is seeking papers and panel proposals on the following substantive but not exhaustive subjects:

-- A Hand Up:  The Meaningful Tension Between Formal Equality and Substantive Outcomes under the Civil Rights Act of 1964
-- Beyond Legislative Bogs and Dangerous Political Animals:  President Obama’s Legislative Agenda and the Limits of Second-Term Progressivism
--  Endangered Citizens?: Rights and Remedies after State v. Zimmerman
-- Equality, Choice, and Happiness:  the Rise and Fall of DOMA
-- Guns or Butter:  Social Welfare Programs, Modern Problems of Central Banks, Debt Slavery, and Foreign Policies
-- Medicare, Healthcare, and Welfare:  the Poor, the Elderly, and the Needy
-- Moynihan and the Contemporary (In)Stability of the Black Family
-- Racial (Dis)Harmony Then and Today
-- Voting Rights:  Shelby County v. Holder and the Promise of One Citizen, One Vote

Paper submissions must include a working title, bios, abstract, and contact information.
Panel proposals must also include the foregoing information for each of the panel’s participants, and the organizer’s contact information, all of which must be submitted together only by the organizer.
Submit Papers and Panel Proposals by September 30, 2013 to: Reginald Leamon Robinson, Howard University, Conference Chair and Founder, MAPOC 2014: light_warrior@verizon.net.