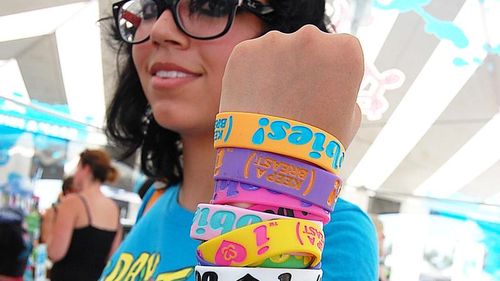 The school district relied most heavily on Fraser, defending the bracelet ban as an exercise of its authority to restrict lewd, vulgar, profane, or plainly offensive student speech allowable under Fraser.  However, in the en banc opinion joined by 9 judges, the Third Circuit held that although under Fraser, "a school may categorically restrict plainly lewd, vulgar, or profane speech that offends for the same reasons obscenity offends,"  Fraser "does not permit a school to categorically restrict ambiguous speech that a reasonable observer could interpret as having a lewd, vulgar, or profane meaning and could plausibly interpret as commenting on a social or political issue."  (emphasis added).

The Third Circuit noted that the Tinker disruption standard remained as a "backstop" to the school's argument, but held that here it was not effective.  Tinker, the court asserted "meant what it said: ―a specific and significant fear of disruption, not just some remote apprehension of disturbance," and in the case of the Easton School District's ban on the bracelets the "record of disruption is even skimpier" than it was in the case of the Des Moines school district's ban on the black armbands at issue in Tinker.

For the 5 dissenting judges,there was some doctrinal disagreement over the controlling rationale of Morse (the "Bong Hits 4 Jesus" case), but the central issue was the applicability of Fraser.  For the dissenters, the balance tips toward deference to the school and the fact that the phrase "I ♥ boobies! not only expresses support for those afflicted with breast cancer, but also conveys a sexual attraction to the female breast," allows the school to ban the bracelets.  This is true even if  "certain facts indicate that a sexual interpretation of the ―I ♥ boobies bracelets may be at the outer edge of how a reasonable observer would interpret speech."

In a very short separate dissenting opinion, but signed by all 5 dissenters, Judge Greenaway, Jr. makes the point that the majority opinion provides little guidance to school districts. Thus, the "I ♥ boobies" Third Circuit opinion joins the "My Space" off campus school speech Third Circuit en banc opinion in 2011, which provided just a little guidance.  Yet perhaps the guidance is this: school officials seeking to restrict student speech do so at their own peril.

Once again, I am astonished by the activist liberal judges of the federal Court of Appeals, who would permit a suggestion of "sexual attraction to the female breast" to be introduced to schoolchildren. What horrors might follow if young female students became similarly concerned about ovarian cancer? The five dissenters are so on the mark that our courts, guardians of our liberty, must defer to school officials, who only seek to vigilantly root out any possibility that knowledge of "S-E-X" would taint our children.