In Galloway v. Town of Greece (New York), the Second Circuit held that the town's practice of legislative prayer "impermissibly affiliated the town with a single creed, Christianity."

The Court granted the Town's peitition for writ of certiorari, and the Solicitor General has just filed the United States Government's brief supporting the Town.

At issue is an application of Marsh v. Chambers (1983), in which the Court upheld the constitutionality of the Nebraska legislature's employment of a chaplain to lead a legislative prayer.  The majority opinion, authored by Chief Justice Burger, was seemingly not worried that the same chaplain had been employed for almost two decades, and relied upon the historical practice of legislative prayer, applying Lemon v. Kurtzman.

The Second Circuit in Town of Greece, however, looked at the content of the prayers and essentially found, as we phrased it here, "one invocation to Athena out of 130 is simply not sufficient" to meet the requirement of non-endorsement given that two-thirds of the prayers contained references to “Jesus Christ,” “Jesus,” “Your Son,” or the “Holy Spirit.” 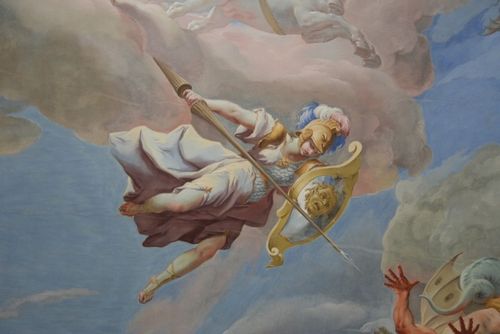 The Solicitor General's brief, however, argues that the court should not consider the content of the prayers.  The government argues:

Under the principles announced in Marsh, which relied heavily on the history of legislative prayer in this country, a prayer practice that is not problematic in the ways identified in Marsh (as petitioner’s practice concededly is not) does not amount to an unconstitutional establishment of religion merely because most prayer- givers are Christian and many or most of their prayers contain sectarian references. The unbroken history of the offering of prayer in Congress, for example, has included a large majority of Christian prayer-givers and a substantial number of prayers with identifiably sectarian references. Neither federal courts nor legislative bodies are well suited to police the content of such prayers, and this Court has consistently disapproved of government interference in dictating the substance of prayers.

Taken to its logical conclusion, the government's position here would disable the judiciary from considering the content of any prayer, including one that was vigorously and even violently sectarian.

RR
[image of Athena, via]

Listed below are links to weblogs that reference Obama Administration Supports Town of Greece's Prayer on Certiorari to United States Supreme Court:

I think that the problems in Greece NY are another example of the fallout caused by a recent shift in the definition of the term "religious freedom."

The term used to mean freedom of belief, of assembly, of proseltyzing,etc. But it is rapidly shifting to a new meaning: the freedom by persons of one faith to ignore and denigrate women, minorities, and persons of other faiths and of no faith. This new definition is occasionally seen in the media where conservative Christians who run a business to provide wedding services to the community such as florists, hall renters, wedding cake bakers, etc. refuse to provide these services to same-sex couples because it conflicts with their negative beliefs about the LGBT community and same-sex marriage. They claim that religious freedom in America guarantees them the right to discriminate even though human rights legislation in their state requires them to not discriminate on the basis of gender, race, skin color, sexual orientation, gender identity, etc. They want to discriminate -- against lesbians, gays, and bisexuals in the case of some in the wedding industry, and against non-Christians in the case of the Town of Greece and many other municipalities.

Yet, one of the core teachings of Christianity which is shared by almost all other religions is the Ethic of Reciprocity -- commonly called the Golden Rule. This new form of religious freedom -- the freedom and liberty to discriminate against others -- is a direct contradiction of the Golden Rule.