An  ABA Journal article by Mark Walsh tells us that last Term, 2012-2013, was "another big one" for amicus curiae briefs at the United States Supreme Court: "Seventy of the 73 cases, or nearly 96 percent, that received full plenary review attracted at least one amicus brief at the merits stage."

The same-sex marriage cases of Windsor and Perry, with 96 and 80 respectively and the affirmative action case of Fisher, with 92.

Shelby County v. Holder, the Voting Rights Act case, attracted 49 amicus briefs, including one from ConLawProf Patricia Broussard (second from right) and her students at FAMU College of Law, as pictured below. 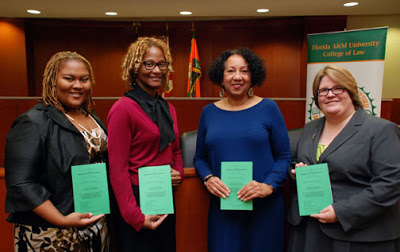 Yet perhaps the most interesting aspect of the ABA Journal article is its chart displaying the citation rate of amicus briefs by Justice, with Sotomayor ranking at the highest end and Scalia and Alito at the lowest end.

Worth a look, especially for ConLawProfs writing, signing, or assigning amicus briefs.

Listed below are links to weblogs that reference Daily Read: The importance of amicus briefs: