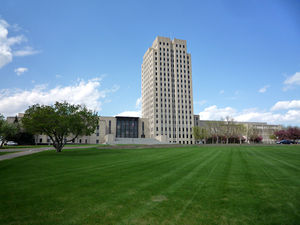 North Dakota State Capitol Building
Judge Daniel Hovland's opinion in MKB Management, Inc. v. Burdick grants a preliminary injunction against North Dakota House Bill 1456 passed by the legislature and signed by the Governor, which would make it a criminal offense to perform an abortion if a “heartbeat” has been detected, thereby banning abortions beginning at approximately six weeks of pregnancy, with limited exceptions.  As the plaintiffs, who run the only abortion clinic in North Dakota, argued, abortions before six weeks are exceedingly rare, in part because a woman rarely knows she is pregnant before that time.

It is crystal clear from United States Supreme Court precedent that viability, although not a fixed point, is the critical point.

(emphasis in original).  He characterized the Defendants’ arguments as "necessarily rest[ing] on the premise that every Court of Appeals to strike a ban on pre-viability abortion care has misread United States Supreme Court precedent."  He stated that "until" Roe v. Wade and Casey are "overturned by the United States Supreme Court, this Court is bound to follow that precedent under the rule of stare decisis."

After briefly assessing the traditional standards for a preliminary injunction, Judge Hovland enjoined North Dakota House Bill 1456 which was to become effective August 1.

Where and on what basis the "viability" line can be drawn remains uncertain in the continuing abortion debates, but six weeks is certainly too early.