Justice John Paul Stevens in the New York Review of Books writes a thoughtful "dissent" in the Court's ruling in Shelby County around his review of Gary May's outstanding book Bending Toward Justice: The Voting Rights Act and the Transformation of American Democracy (Basic).  Justice Stevens's piece is mostly an indictment of Chief Justice Roberts's majority opinion in Shelby County, based on some of May's study of voting discrimination; but he also has quite kind things to say (and justifiably so) about May's excellent history.  (Our posts on Shelby County itself are collected here.) 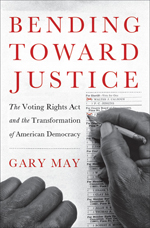 And Justice Stevens takes on Chief Justice Roberts's new-found doctrine of "equal state sovereignty"--a doctrine that drove a good part of the result.  Justice Stevens says that unequal treatment of states is woven right in to the fabric of the Constitution itself.  In particular, the three-fifths clause gave southern states a "slave bonus" in political power, giving those states disproportionate representation and even leading to the election of Thomas Jefferson over John Adams in 1800.  If the original text of the Constitution itself can treat states so dramatically differently, why this new doctrine of equal state sovereignty?  (We posted on this new doctrine here.)  (It can be no answer that the Reconstruction Amendments abolished the three-fifths counting system, for the Reconstruction Amendments themselves were specifically designed to give Congress power over the states, and led to dramatically different treatment of the states.  It similarly can be no answer that the Tenth and Eleventh Amendments protect state sovereignty (even if they do), because the Reconstruction Amendments came after them.  As last-in-time, they at least inform the meaning of the earlier amendments, even if they don't do away with them entirely.)

Listed below are links to weblogs that reference Justice Stevens's Dissent in Shelby County: