Flags on Government Property: Confederate Flag in the Fourth Circuit and Rainbow Flag in Louisiana

A Fourth Circuit panel issued its opinion in Sons of Confederate Veterans, Virginia Division v. City of Lexington, Virginia holding that Lexington's "flag pole" ordinance limiting flags to that of the nation, state, and city was constitutional under the First Amendment.  The Sons of Confederate Veterans argued on appeal that the City was motivated in enacting the ordinance by its desire to bar the Confederate flag from its flagpoles.  For the court, even if that were true, it was of no constitutional moment.  The flag poles had been a "designated public forum," but the

Ordinance has the effect of closing a designated public forum — the perpetual availability of which was never guaranteed — to all private speakers. The City was entitled to listen to the public and to enact ordinances that are constitutional in text and in operation, and that are supported by the electorate.

The court quickly added, however, that

the Ordinance specifies that it does not “prohibit or curtail individuals from carrying flags in public and/or displaying them on private property.” Lexington City Code § 420-205(C) (2011). As a result, all private groups and individuals remain free to express their flag-bound messages in other ways.

The limitation of the flag poles - - - or flag standards - - - may or may not be operative in a reported plan by a Louisiana legislator to ban the rainbow flag (aka LGBT pride flag) from government property.  The prompting incident was reportedly a rainbow flag that was "hoisted" on a government flag pole to less than universal acclaim.

If the Louisiana legislators need some advice about drafting a constitutional ordinance, they might have a look at Sons of Confederate Veterans.  A ban on all nongovernmental flags, including the rainbow flag, on government property?   Violative of the First Amendment.  A ban on all nongovernmental flags on Government-owned flag poles?  Likely to survive a First Amendment challenge.  And - - - just to be clear - - - a ban on rainbow flags while allowing Confederate flags?  Not constitutional.

And a government ban specifically on the "rainbow Confederate flag" ??? 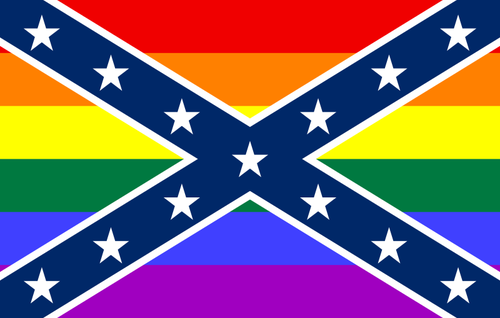 Listed below are links to weblogs that reference Flags on Government Property: Confederate Flag in the Fourth Circuit and Rainbow Flag in Louisiana: