Federal District Judge for the District of Columbia, Amy Berman Jackson, has granted summary judgment for the government in her opinion in Scott v. United States in which Scott had alleged that the United States Supreme Court Police violated clearly established First Amendment principles when they arrested him for unlawful entry while he was wearing a jacket bearing the message “Occupy Everywhere” in the Supreme Court building. 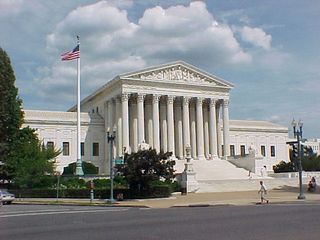 Recall our discussion in January 2012 when Scott was arrested (including video).   Since then, as we have also discussed, the federal statute prohibiting certain displays (including words) has been held unconstitutional by a different DC Federal District Judge, at least as to the plaza, and the Supreme Court quickly amended its regulation.

Scott sought damages and expungement of his record, alleging false arrest and imprisonment.  Judge Jackson rejected this claim finding that there was probable cause to arrest Scott, and even if there was not, the officers had a reasonable good faith belief that there was probable cause.  Jackson concludes that Scott's jacket "fell squarely" within the plain language of the "display clause" of 40 USC §6135:

he was displaying a device (his jacket) in the building which had been adapted to bring public attention to the “Occupy” movement.  See Kinane v. United States, 12 A.3d 23, 25–26 (D.C. 2011) (affirming the conviction of protestors for violating the display clause of section 6135 where the protestors entered the Court with shirts that read, “Shut Down Guantanamo”); Potts v. United States, 919 A.2d 1127, 1130 (D.C. 2007) (holding that an article of clothing can be a “device” within the meaning of section 6135). Since Scott was violating the display clause, he had no authority to remain in the Supreme Court building after the Supreme Court Police told him to cover the display or leave. Therefore, Scott’s violation of section 6135 provided the “additional specific factor” that the Supreme Court Police needed to establish probable cause to arrest him for unlawful entry.

Judge Jackson rejected Scott's attempts to distinguish his situation and his reliance upon that other famous jacket case, Cohen v. California. The issue of whether the police officers could reasonably rely on the state of the law may make Scott's claim difficult to win on appeal.  However, the future constitutionality of the so-called display clause criminalizing a person wearing a jacket with words such as "Occupy Everything" is far from settled.

Listed below are links to weblogs that reference District Judge Finds No Government Liability in "Occupy Everything" Jacket Arrest in Supreme Court Building: