In the contentious and closely-watched case of Hobby Lobby, Inc. v. Sebelius, the Tenth Circuit has rendered its opinion concluding that a for-profit corporation has free exercise of religion rights under the federal Religious Freedom Restoration Act (RFRA) and the First Amendment.

Hobby Lobby challenges the constitutionality of the so-called "contraception mandate" under the Affordable Care Act that require health insurance plans to provide contraception coverage to employees.  We've previously discussed the issue and the circuit split here. 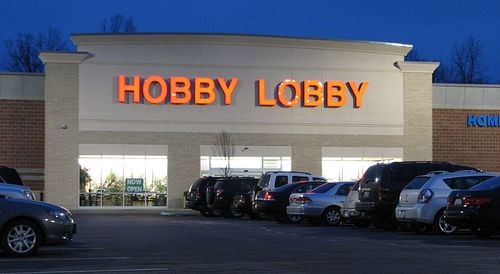 The federal district judge had rejected Hobby Lobby's claim, noting that it was a for-profit completely secular company - - - it is a corporation operating 514 arts and crafts stores in 41 states.  The federal district judge also denied the injunction as to the for-profit corporation Mardel, a Christian supply and bookstore chain, and to the family owning both the corporations through a management trust.  Hobby Lobby sought extraordinary relief from the United States Supreme Court after a Tenth Circuit panel declined to issue a stay; Justice Sotomayor in her role as Tenth Circuit Justice then rejected the claim, ruling that the privately held corporations did not "satisfy the demanding standard for the extraordinary relief they seek."

The Tenth Circuit granted the request for initial en banc review - - - thus, there is no Tenth Circuit panel opinion - - - and issued a lengthy set of opinions from the eight judges, one judge being recused. The majority opinion on pages 8-9 details the rationales of the individual judges.  But the essential division is 5-3 over the issue of whether a corporation, even a for-profit secular corporation, has a right to free exercise of religion under RFRA and the First Amendment.  The majority concluded there was such a right and that the corporations demonstrated a likelihood of success for prevailing on the merits.

Hobby Lobby and Mardel are entitled to bring claims under RFRA, have established a likelihood of success that their rights under this statute are substantially burdened by the contraceptive-coverage requirement, and have established an irreparable harm. But we remand the case to the district court for further proceedings on two of the remaining factors governing the grant or denial of a preliminary injunction.

Only a plurality of judges would have resolved the other two preliminary injunction factors  - - - balance of equities and public interest - - -  in Hobby Lobby and Mardel’s favor, thus the remand.

The majority, however, held

as a matter of statutory interpretation that Congress did not exclude for-profit corporations from RFRA’s protections. Such corporations can be “persons” exercising religion for purposes of the statute. Second, as a matter of constitutional law, Free Exercise rights may extend to some for-profit organizations.

It then characterized the government's argument as being that these "Free Exercise rights somehow disappear" when "individuals incorporate and fail to satisfy Internal Revenue Code § 501(c)(3)."  The majority found this distinction to be one that cannot be supported by First Amendment doctrine.  It did, however, implicitly limit the facts under which for-profit corporations could be found to have free exercise rights:

The government nonetheless raises the specter of future cases in which, for example, a large publicly traded corporation tries to assert religious rights under RFRA. That would certainly seem to raise difficult questions of how to determine the corporation’s sincerity of belief. But that is not an issue here. Hobby Lobby and Mardel are not publicly traded corporations; they are closely held family businesses with an explicit Christian mission as defined in their governing principles. The Greens, moreover, have associated through Hobby Lobby and Mardel with the intent to provide goods and services while adhering to Christian standards as they see them, and they have made business decisions according to those standards. And the Greens are unanimous in their belief that the contraceptive-coverage requirement violates the religious values they attempt to follow in operating Hobby Lobby and Mardel. It is hard to compare them to a large, publicly traded corporation, and the difference seems obvious.

Thus, the majority stated that it did not share any concerns that its holding would prevent courts from distinguishing businesses that are not eligible for RFRA’s - - - and presumably the First Amendment's - - - protections.

While the analysis of substantial burden that follows is important, it is the holding that a secular for-profit corporation has a sincerely held religious belief that entitles it to assert a free exercise claim is the centerpiece of the controversy.

nothing short of a radical revision of First Amendment law, as well as the law of corporations. But whatever one might think of the majority’s views, the fact remains that they are wholly unsupported by the language of the Free Exercise Clause or the Supreme Court’s free exercise jurisprudence, and are thus, at best, “considerations for the legislative choice.”

The ability of for-profit corporations to have Free Exercise rights under the First Amendment - - - along with their Free Speech rights as articulated in the still-controversial Citizens United v. FEC, decided in 2010 and liberally cited in Hobby Lobby - - - is highly contested.  This may certainly be going (back) to the United States Supreme Court.

Listed below are links to weblogs that reference Tenth Circuit Recognizes For-Profit Corporations as Having Religious Freedom and Free Exercise Rights: