In a divided opinion in Cressman v. Thompson, the Tenth Circuit has allowed a First Amendment compelled speech challenge to Oklahoma's license plate (pictured below). 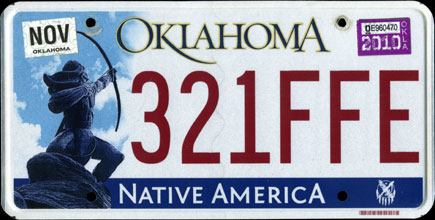 For those familiar with Wooley v. Maynard (1977), the case seems as if it is a mere reprise.  However, unlike Maynard's objection to the New Hampshire license plate motto "Live Free or Die," Cressman objects to the image on the license plate.  For the dissenting judge, this distinction makes all the difference.  In a nutshell, the brief dissent contends that Cressman can not clear the basic hurdle of "speech."  As dissenting judge Kelly explains:

In 2009, Oklahoma changed its standard-issue license plate to incorporate a representation of Allan Houser’s “Sacred Rain Arrow,” on permanent display at Tulsa’s Thomas Gilcrease Institute of American History and Art.  Though awarded the Automobile License Plate Collectors Association’s best plate of the year award for 2009, Mr. Cressman considers his display of the image on the license plate to be compelled speech.   . . . .Mr. Cressman has connected the image on Oklahoma’s license plate to the sculpture and that sculpture to a Native American legend. He asserts that the license plate promotes “pantheism, panentheism, polytheism, and/or animism,” all of which are antithetical to his religious beliefs.  However, he has not alleged facts from which we can reasonably infer that others are likely to make the same series of connections.

For the majority, it was sufficient that Cressman alleged that the image had an ideological message at the complaint stage.  The court's analysis of symbolic speech and the "particularized message" cases - - - think flags and parades - - - supported this conclusion.  The majority also discussed the compelled speech precedent.  From this, the majority concluded the district judge should not have dismissed the complaint.  The majority declined to enter a preliminary injunction, however, ruling that the State should have the opportunity to present its interests.  The majority very clearly held, however, that Wooley v. Maynard remains viable precedent, despite some arguments that it has been undermined.  The majority also very clearly held that Cressman had standing, except as to one individual defendant.

On remand, the district judge will be considering whether Cressman's plausible allegations can be proven as true.